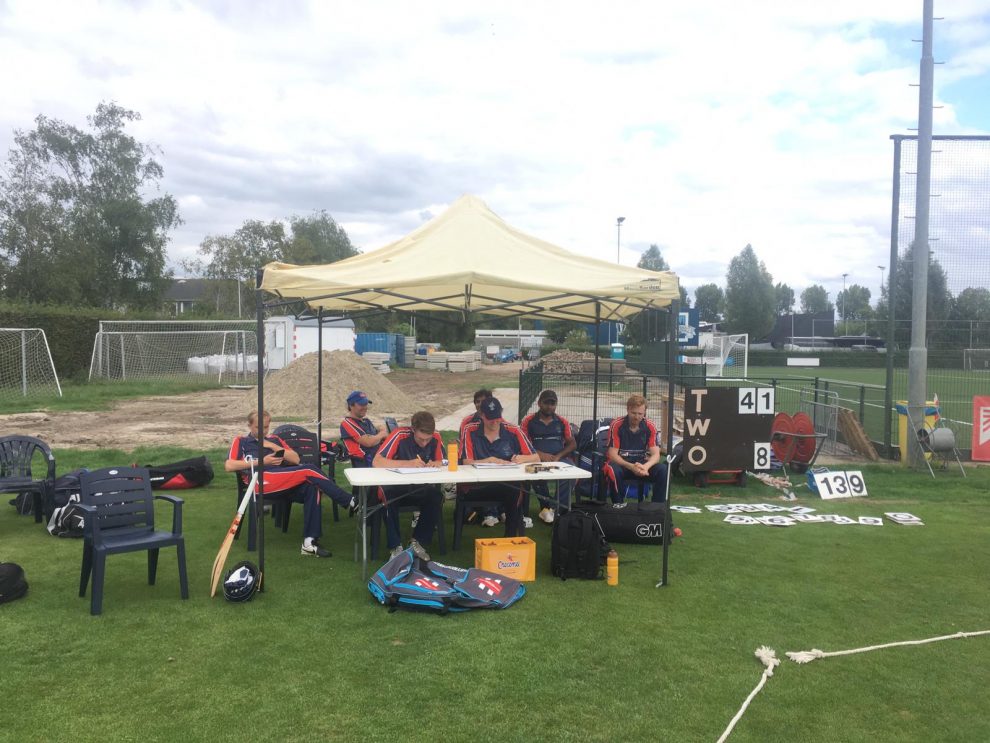 After an eventful season full of ups and downs, we headed to Utrecht for our final official outing of the year. The first moral victory of the day was ours, when despite the maze-like hallways and dressing rooms, everyone managed to find the right one, and was there on time. Still, with the increased pressure of having to hand in his car keys as deposit for the dressing room key, Sander called the toss wrong, and we started fielding.

Unfazed by this tactic, Chris and Prem opened the bowling and kept things tight. Not a lot of extras were bowled, fielding was solid, and batsmen refused to take risks. As a result, the scoring rate kept steady around 3. Prem picked up the first wicket of the day, followed by Floris at first change. At this point, they were 46-2 after almost 16 overs. Batsman no 4 wanted (understandably) to increase the pace and went for his shots. With Stefan having entered the field and getting a bowl, the batsman hit a 4, and Stefan quickly changed the field and put Marek at deep midwicket. Next ball, the batsman gave Marek a nice practice catch, not knowing he doesn’t need any practice anymore… three down.

In the next overs, the runrate continued to stay low, and by now (93-3 after 26) the batsmen realized they had to try something. As a result, Marek picked up his wicket (LBW) and Prem had a nice catch off Wouters bowling, and after many many failed attempts, we finally had a run out. In the final overs, batsmen gave it all they had, and with some luck managed to add some runs to the scoreboard, to reach 139-6 after 35.

After a short break, Mo and Ivo had the honor of kicking things off. They did so with a very different intent from the opposition, scoring at a nice pace of 4 per over in the beginning. After surviving a couple of close LBW shouts, Mo realized that he actually had to “focus on the ball” (!?!?), and three fours followed quickly. After laying the groundwork, 10 overs and 50-odd runs, Mo (23) and Ivo (25) were out in quick succession.

Sander (7) and Kaushal (11) scored some runs, but Jatin was unfortunately caught on his first ball. Now at 86-5 after 19 overs, the opposition felt they were still in it. Little did they know that these wickets had brought Gijs and Marek to the crease. And both didn’t want to waste any time. In less then 5 overs, they hit the remaining 50 runs, with both ending not out on 33 and 23 respectively.

All in all a solid win, and if the opposition asks if we aren’t “a little too good” for the Zami’s, we can be proud of ourselves, and the second place in the league.