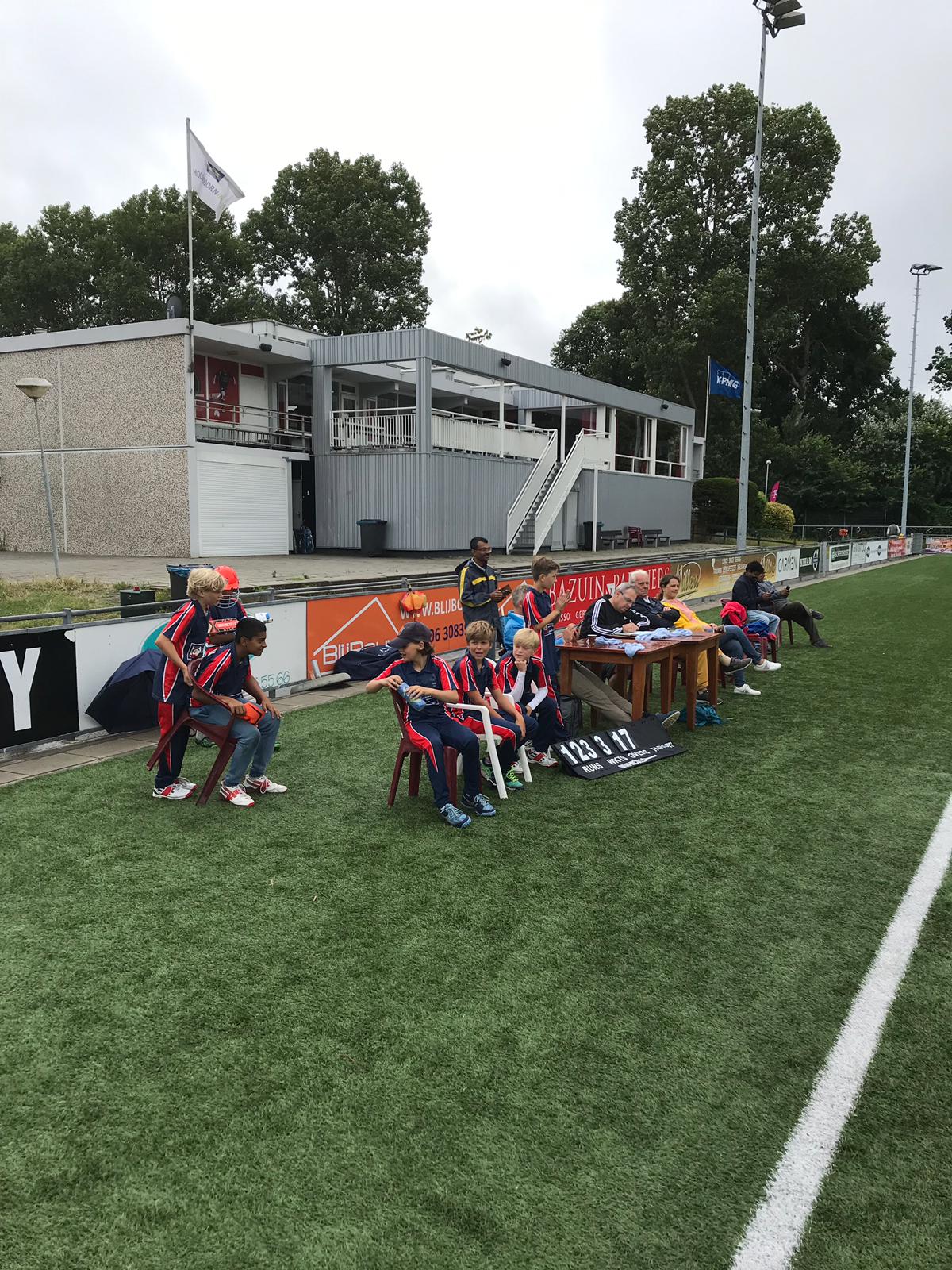 It was the last league match of this season when VCC U13A took the ground against HBS in their away match. Players and parents were more concerned of the weather which did all attempt to spoil the game. It’s pouring now and then since morning – but it was defeated by positive energy and motivation of the players, coaches and scorers. It was a bit delayed start when VCC won the toss and elected to bat first to  post a big total with strong batting line up despite conditions were overcast.

Joris opened the bowling from HBS with good pace, line and length against VCC openers Alejo and Steven. It was showering again! Everyone outside thought the players would leave the ground, but no – umpires and players decided otherwise. Umpires were wiping the ball after every delivery to make sure the ball was dry as much as possible. Great intent!

HBS got the early breakthrough in the 2 nd over when Alejo was caught at point with a mis-timed cross bat shot. It was 11/1. The talented Carlijn came in to bat at number 3 and built a superb 67 run partnership which made the bowling side to wait till 12 th over when she was caught at cover. Although HBS conceded only two boundaries till 6 th over, prompt pairs of legs of Steven and Carlijn kept the scoreboard ticking apart from wide and no balls. They changed the gear from 7 th over when Carlijn hit 3 consecutive boundaries. Danial came in to join Steven and sent a strong message from the very first ball to opposition camp by hitting a magnificent boundary through mid-off region. Soon after, Steven got lucky when a brilliant catch was denied due to no ball. But his luck did not continue much and was run out by an excellent piece of fielding from long-on when he almost completed his third run! Steven’s 17 runs statistically might not sound enough, but the contribution remained highly valuable in view of weather condition and building the partnerships. Another good partnership between Aldino and Danial brought the total to 142/4 in 20 th over when Aldino was clean bowled after scoring a decent 11 runs. Next over VCC’s total became 150/5 when Danial’s fast paced innings of 28-ball 39-runs came to an end while the fuller delivery from Myrthe hit the stumps. He cleared the ropes six times with some stunning display of shots – be it through cover or top of the bowler’s head! HBS was able to contend VCC strong batting line up to 185/6 at the end of 25 overs by some tight bowling and fielding in death overs. Miraj and Francois did their best and each left the ground with 13 runs in their individual account, when Miraj was run out at the very last ball of the innings to complete an impossible 2 nd run.

With an asking run rate of 7.5 per over, HBS openers took the strike against the VCC pacer Tom. Sun was shining and few more parents and enthusiasts took the chair outside the fence! 1 st over was maiden with some great deliveries. Captain Cedric decided bit different this time when he gave the ball to the leg spinner, Farhaan in the 2 nd over itself. HBS started struggling to deal pace-spin combo operation! Only 2 runs came in the 2 nd over. 1 st boundary in the 3 rd over between point and third man gave a ray of hope for HBS’ run chase which did not last long when Farhaan got the opener in Shirsak’s reliable hands at point. Number 3 batsman, Joris was sent back to pavilion with duck by Farhaan in the same over with a gap of one delivery when Shirsak completed the catch at square leg.

HBS is down to 12/2 in 4 overs. After fiery opening spell of Tom where batters got hit on the body few times, the chinaman, Shirsak came to use his arms and got his first over maiden. Miraj, the other spinner came to bowl next over – another economical over barring few wide balls. Shirsak completed his 2 overs spell conceding only 1 run with a wicket where the batsman was bowled missing the flight. HBS appeared clueless to stay in the wicket confronting VCC bowling and sharp fielding. Their batters were in a procession to returning pavilion one after another bringing the team down 24/6 in 11 th over. Their last two partnerships were clutching at straws and put up some sort of resistance against VCC to cross the team total beyond half century. It was just a matter of time to conclude their innings which finally ended at 52 all out in 17.2 overs where extra runs contributed half of the total. Few straight drives from HBS tail enders earned applause in addition to direct hit run out by Carlijn, economical spell by Alejo, one wicket each by Miraj and Steven at the end.

Despite the match was continuing one-sided in favor of VCC – no signs of complacency were seen among VCC troop which was visible by a close LBW shout by whole fielding side which was turned down by umpire Tim de Leede with a broad smile. Finally, VCC is not only just proved too strong to compete by HBS – also finished the league stage at the top of the table remaining unbeaten and keeping the supremacy in all accounts throughout.