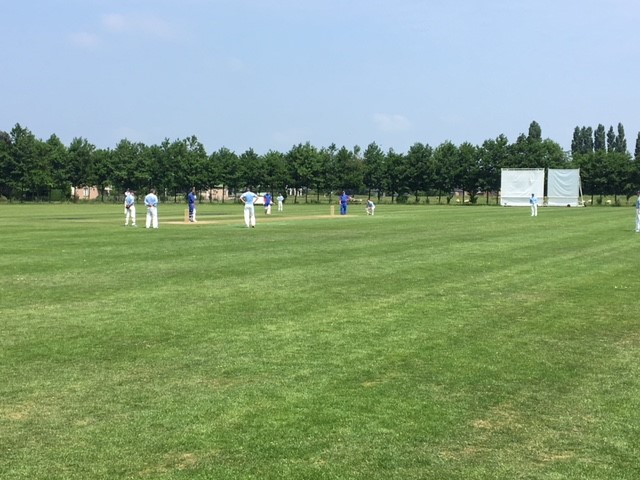 The Zomi’s won their first game of the new season with an impressive 46-run victory over Rotterdam side Hermes, with the run rate proving decisive.

Voorburg won the toss and elected to bat first on the beautifully prepared main ground at sportpark Westvliet, where the ground staff gave us the opportunity to bat on grass. In went the brothers Guus and Rutger, achieving a fine partnership that notched up 50 within half an hour.  Guus went on to bag the highest score of the day, earning 70 runs before he was caught and bowled by Hermes’ J. Verweij. Rutger managed a fine 43 before he fell to a LBW some time later from bowler L. Klokgieters, ending the sibling partnership on an annoying 99, just one short of the magic century.

Rene came into bat third and notched up one run before also suffering a caught-and-bowled, also from L. Klokgieters. Hermes’ only female player, she proved to be their star bowler, with two wickets and two catches.

No. 4 Marc followed on from his amazing century at the last match by getting just over the half-century on 54 before ending the game when time ran out, as not out.

After just over an hour, Voorburg had notched up the 100 at the loss

of just two. John was put in charge of keeping the electronic scoreboard up to date before he was ruthlessly overthrown by a gang of ten-year-olds when he went for a coffee. Young age again proved the mightier force when under-15s player Tanveer proved that he can certainly play with the ‘Wizened Old Men – some of whom are old enough to be his grandfather – by batting fifth and getting a handsome 31 before being caught by Klokgieters. It was a ball from bowler RM ter Plegt that had proved too tempting, was sky’d, and the catch was certainly class. Voorburg would have dropped it of course.

With less than a few overs remaining following a fine showing from the first five batsmen, Pieter came in and managed a run to take the score to 200, before he was bowled LBW by DJ Barnett. Vishal entered the fray as No.7 and also managed a run, before the game ended with him and Marc not out. Lennaert, John, Richard and Colin did not bat.

Voorburg’s final score was 201,  which with 25 extras from 20 wides, three leg-byes and two no-balls, gave us a pretty handsome 226-5. We had managed two hours and 15 minutes at the crease, leaving Hermes with an impressive (and insurmountable) 227 needed for victory.

After a convivial tea break, Hermes came into bat. Opening batsman J.M. van de Giezen was clean-bowled for a duck on only the third ball from Colin, a blistering cruise missile that wholly removed the middle stump. Hermes’ second batsman M. Beijer lasted much longer, achieving his team’s biggest score of the day of 61 before he was bowled by Tanveer.

Their batting seemed to drag on a bit, achieving just 92 by the water break, leaving what would prove to be an unattainable target of eight per over in the second half. And our fielding was good; mostly sharp, and with some excellent throwing. John had also realized that consistency is important in cricket, managing a third consecutive injury after deciding that stopping balls with his feet was slightly safer than trying to catch it. But not sent off for bleeding on the pitch this time.

Hermes No. 3 batsman M. van der Graag was caught by wicket keeper Richard on a swift ball from Vishal, who then swiftly removed No. 4 W. van Wijk by clean bowling him for a duck. RM ter Plegt earned his team a couple of runs before being bowled by Lennaert. Teenager T v Giezen proved that age is no match for experience when the 13-year-old player was stumped on 10 runs by Richard on a ball from Lennaert. Vishal removed Hermes’ second-highest scoring batsman J. Verweij, who earned 29, before Klokgieters was run out for four.

Managing only 141 runs – far short of the Voorburg tally – it was always an uphill struggle for the visitors, at such a slow run rate. However, they did manage to get 39 from Voorburg’s 21 wides, 11 byes, three leg byes and four no balls. This made our extras their second-highest scorer. And coming at a rate of more than one extra per over, this did neatly prove the Voorburg philosophy that “an over is not really an over unless it has a wide in it.”

Thanks to all who played! 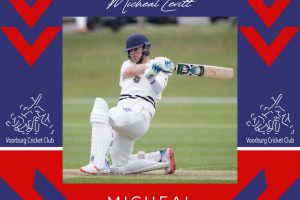 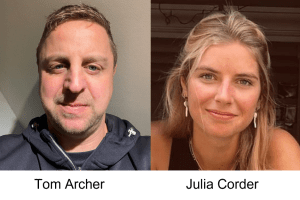 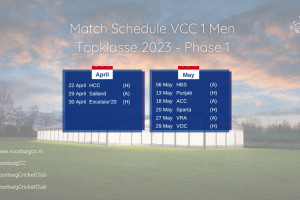