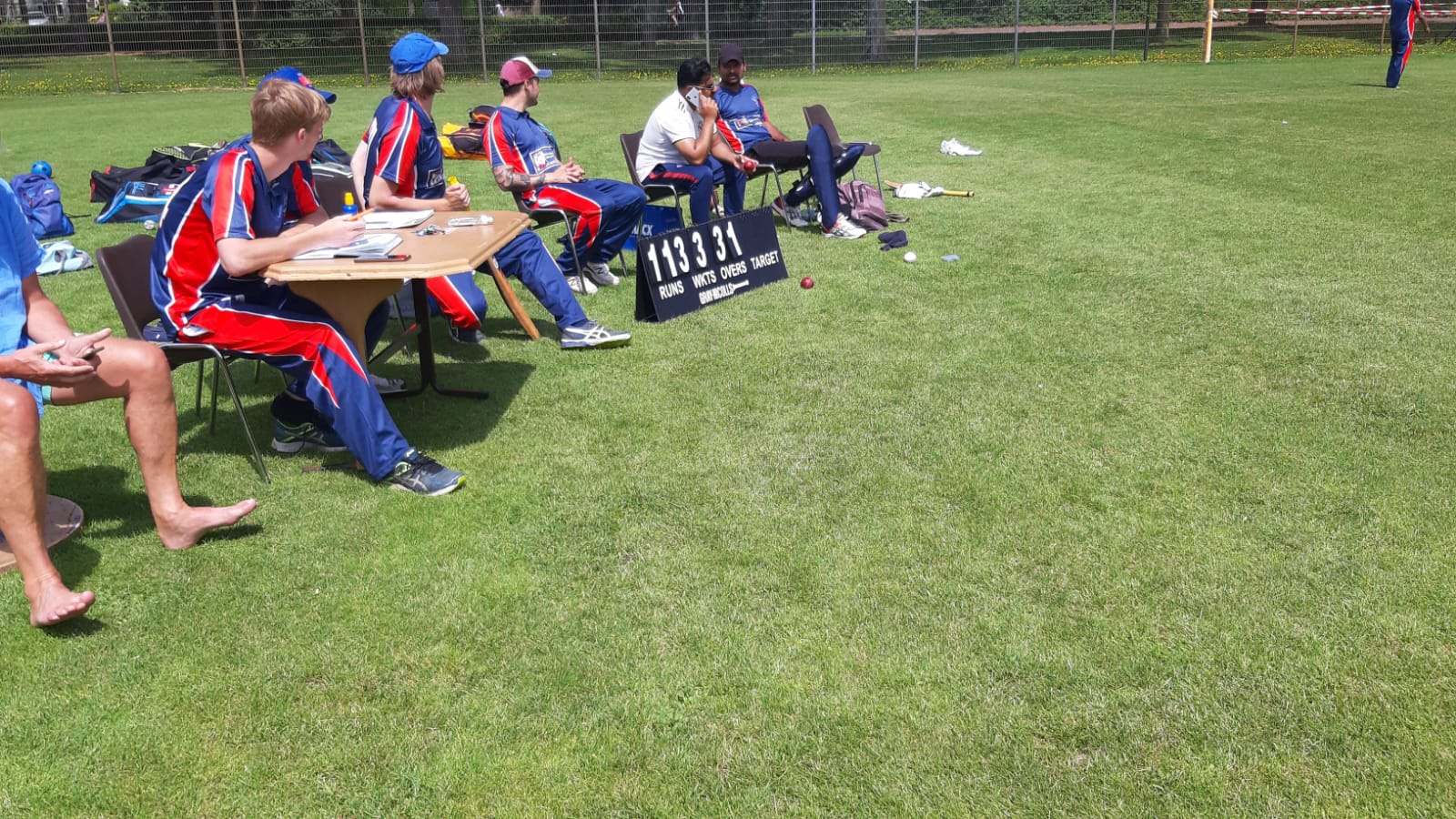 Eindhoven away, always difficult. This is what I thought when I arrived at VCC at 08:15 in the morning. Tired but motivated to play, the men in blue started their journey to Eindhoven and around 10:00 we arrived there. When inspecting the field, Lau found many spider webs on it. He still believes this, although we knew it was just dew. It was going to be a long day in the field after losing the toss, however to our surprise we were asked to bat 50 overs. Before we could start the game, we had to rescue Flo “Pollie” van Hoogdalem out of the dressing room because he locked himself (or was locked by someone as he tried to convince everyone, we still don’t know). It doesn’t matter but what we do know is that it might have been better if we didn’t rescue him. Maybe someone else would have caught those two sitters…

Tahir and Lau opened the batting and they both looked solid. Quick singles were taken and good cricket was being played. The dew/spider webs made sure that the outfield was slow, therefore some shots did not reach the boundary. Out of nowhere, Tahir got bowled and this brought Haroldinho to the crease. Harold smacked two fours before he got out caught behind. The man, the myth, the legend Remco was back and he made 1 beautiful run before he joined us back in the pavilion / on the side with no shade. We needed someone who could stabilize the innings and Skipper Rehan did just that. He and Lau put up a partnership of 103 runs to get us back in the game. Lau got a life early and made the most of it, finishing a good innings on his favourite position… uhh number: 69. Our loyal, and only fan Ben cheered and decided to leave straight after. At least he wasn’t wearing an HCC shirt this time 😉.

Rehan played well and scored 44 runs. After 37 overs we were 156-5 and we were in a good position to push on. Arsalan scored a quick 32 and Iftikhar score a quick 12, before Mr Zaka fell for 1. Ricky Ricardo played a good cameo, ran hard and scored 18 runs himself. Sajjad made 11 runs before he got run out on the penultimate ball. In the end, we scored 240 runs, a competitive score.

On paper, our bowling attack is really good. Maybe it was the heat, maybe we underestimated the opposition, maybe we thought 240 was more than enough. I don’t know what happened, but our bowling was not on point and our fielding was not good as well. The batsmen of Eindhoven assessed the conditions and cashed in on bad deliveries. We had chances, but we dropped a few catches and our standards dropped with it. At 63-3-13 we still had every chance to win the game and even at 117-4-21 we had a good chance. There were one or two batsmen left and one wicket would open the door to a Voorburg victory. Unfortunately, we dropped their best batsman a couple of times and he made the most of it with a well-played 88. I dropped an absolute sitter on deep-square and that could have been the turning point (We really should have left him in the dressing room…). Could’ve, would’ve, should’ve, all thoughts that don’t matter in the end. Eindhoven chased our score down in the 47th over for the loss of 6 wickets. Sajjad (2-51-8) and Ricardo (1-30-7) were the pick of the bowlers.

We’ve let ourselves down fielding wise, however, we ca

n be optimistic. Our batting is getting stronger every game and we know how good we can be in the field and with the ball. We’ve got a relatively new side and we’re getting to know each other better every game. The team spirit is good and we can use this as a platform to play better cricket. Next week we’re playing Excelsior away, which is not that far compared to Eindhoven and probably on grass. We will train hard (the turn-up to practice is very good) and we will show this league how good of a team we are. Catches win matches and this week we’ve let ourselves down; Next week we will bounce back!

Floris van Hoogdalem with some additions by the editorial office