It was a warm welcome back to Eindhoven for VCC after a long drive to the ground. Many teams including ourselves had fought but not managed to conquer the team at their home ground. But this time just felt different, the vibe around our team was different. Testemant to our prolific performances in the past month, we had an optimistic view. This time we were ready to shed blood, sweat and tears to conquer Fortress ECC. Our skipper finding toss form at the right moment won the toss to bring Eindhoven into bat first.

The wicket, the diagonal field, the steaming opening bowlers created an eerie atmosphere. You could feel it that this was gonna be a proper dogfight between two quality sides. Sajji and Baba (Ali) steaming in off a very bumpy run up made the batters fight out of their skin. Baba got his first off a proper full banga which should have been deposited back to Voorburg but only found the hands of Stef who took a fine grab at mid wicket. Up next was a proper demonstration of quality seam bowling attacking the wickets at all times on a difficult wicket. Baba and Sajji did a demolition job on the wickets sending the pegs flying pricing a wicket each.

After a quality start to his spell, Stef got his rewards nearing the end of his. Honing in on the wickets he got an LBW (finally the umpire decided to raise his finger for one) and crashed the stumps of another. Wickets kept falling in quick successions for the home side but the even up next was anything but quick. Stef had a go bowling the ever dangerous full toss (I am thoroughly convinced it’s the most difficult ball to face) and the batter chipped it straight to mid off. It had to be up there with the easiest grab anyone had ever got yet to our lovely Jakes it perhaps didn’t seem so. He contemplated his whole life choices while the ball was in the air but we are just glad his trembling hands were able to hold on this dolly. Eindhoven lost another soon after to an LBW given to Sajji as they looked in a very perilous position. Hereafter, they strung together a strong partnership for the 10th wicket as the looked to consolidate their innings to get some sort of total on the board to bowl at. I must say the vibe was looking quite grim amongst the Voorburgers as the moment looked to have shift with Eindhoven. VCC hoping for a bit of magic to happen, what Kalyan did next was nothing short of wizardry. Jakes looking to bowl an absolute peach down leg (AGAIN) caught an inside edge as Kalyan sharply took a very impressive catch leaving everyone in awe of this piece of keeping. With their skipper gone we looked to end their misery and Stef knocked the pegs for the final wicket soon after. Ask anyone at the club if VCC would take 101 all out at Eindhoven at the start of the day and there would be a line long enough to reach all the way to Eindhoven. Properly impressive performance by the boys in the first innings and the vibe was full of confidence to win the game from this strong position.

Our new dynamic duo of ReRe (Rehan) and Nene (Nehaan) opened the innings for us. NeNe looking pretty solid but fell to his demise in the 5th over after scoring 7. Boef (Alyan) and ReRe batted well for a small partnership. However Rehaan fell right as things were looking good for us after making a solid 15 which was a good innings in the context of the game. With hopes from the team that Niri would go in and look for his quick singles as he always does, he followed up with an exhibition of test cricket. Boef holding his end up nicely they played out a series of wonderful maidens which seemed to confuse the spectators a lot but had the batters in good spirit. Boef then had to depart having played a solid consolidators knock of 9 off 45 balls.

In came Lau with clear instructions to look to score which seemed like damn near gibberish to Nirav batting at the other end who has happily defending everything in his sight. Lau took advice from Nirav to try and hit balls along the ground and threw it away as he tried to pump a few out of the ground. Unfortunately he smoked a full bangs straight back to the bowler leaving us all in desire of how this guy seizes to amaze us in some way or another everything he bats. Our ever trusting Baba came in next in the mood to finish things off. While on the other end Nirav had one nicked to the keeper and departed for his quick 6 of 40 balls. Jakes came in for a brief innings nicking off a leggie to the slips. The combination of Flo and Baba put on a show in the middle playing a controlling innings and finishing the game of in a composed manner. Quality knock from Baba to score 31* off 42 and a proper supporting role from skipper Flo finishing on a quickfire 8 off 44. Perhaps the scoring and the strikerates this game were a bit dull but that was the end of it. Absolute ecstasy broke through the lads as we had now qualified for a home final. With each and every player smiling from ear to ear it was absolute scenes with the team. Least to say we enjoyed this game but we were all now chuffed and looking forward to final the following week. A throughly deserving final awaited this supreme bunch of players. 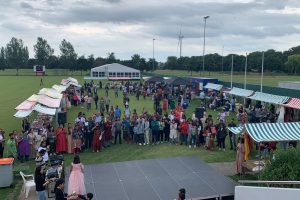 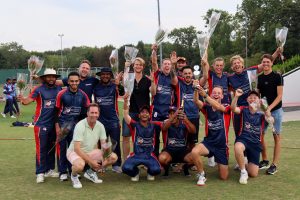 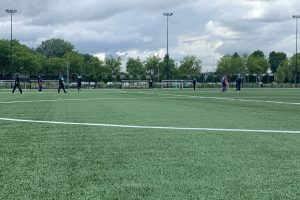