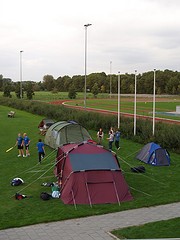 By special request, the sun shone and we had 4 days of highly enjoyable, uninterrupted cricket! As if to show what was possible though, Hallam CC were treated to a 15 minute downpour of apocalyptic proportions, while at the beach on Wednesday evening. A few hundred metres away it remained perfectly dry. In all, 70 youngsters passed through VCC enjoying 16 coaching clinics and 11 matches supported by 15 coaches. As last year, Hallam CC from Sheffield, UK set up camp by the pavilion but additionally this year, we were visited by the Dutch Lions U13s and St Stithians from Johannesburg, South Africa, on the Tuesday. We were also delighted to welcome 4 enthusiastic and inspirational coaches in Amol Muzumdar (leading run scorer in the Ranji Trophy), Peter Borren (Captain, Netherlands National Team), Mudassar Bukhari (fast bowler and big hitting batsman, the Netherlands) and Wesley Barresi (wicket keeper batman, the Netherlands). However, the week would not have been so successful were it not for the all the volunteer assistant coaches, scorers, umpires, groundsmen and particularly the hard-working mums who provided breakfast, lunch, tea, dinner and many, many jugs of drink.. Highlights of the week included: –          Floris and Alyan hitting stylish 50’s as VCC chased down Hallam’s total of 156, in which Louis Marven also scored 50. –          The infamous trip to the beach with 15 boys swimming in the sea before Scheveningen Pier suddenly disappeared into the blackness and the heavens opened –          Wesley Barresi’s wicket keeping clinic which was over-subscribed by a factor of 2 –          Being able to play on an excellent grass wicket for 3 of the 4 days –          All the excitement of two matches on the final day being decided by “super overs” But what was perhaps most satisfying was seeing the dramatic improvement in the standard of cricket as 4 completely mixed teams made up of boys and girls, aged 10-13, from VCC, Hallam, HCC, ACC, Salland etc competing on the final day. Great team spirit, everyone involved, massive enjoyment and good cricket! The week was rounded off with prize giving: –          Floris de Lange (VCC) was voted player of the week. –          Harm Lameris (Salland), Felix Vecchi (HCC) and Jack Berg (HCC) were given “special recognition” awards by Sean Marven of Hallam CC –           Zaryaab Hassan, Alisdair Rittey and Chris Chung (all Hallam) received “special recognition” awards from VCC –          Finally, Hallam CC presented VCC with an engraved tankard and in return, VCC presented Hallam with a commemorative, Delft blue plate emblazoned with the VCC logo and all participants received a similarly hand-painted mug and a “Cricket Netherlands” sticker. Once again, judging by the smiling and enthusiastic faces of the participants, the week was great success. Hopefully, the VCC Youth Cricket Week has now become an annual event and will be matched by similar events at other clubs. Thanks too, to Hallam CC for making the trip from Sheffield. We believe that by continuing to build the relationship between the 2 clubs, we can provide great opportunities for the development of young players.