Home » News » GMM full of plans and some question marks 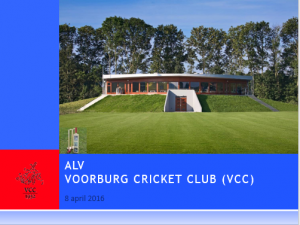 The GMM on Friday night April 8 brought together some 20 people. After a minute silence for Frans de Leede, who recently passed away the Board and members went through some issues that are worth taking notice of. The budget was approved, although some were disappointed to see that this year’s budget cuts deeper into the reserves than promised in last November’s GMM. The Board was asked to compensate for that in 2017 and keep a close eye on costs and expenses this year. Also it was asked to have another look at how is taken care of reservations and depreciation. Also the discussion of Voorburg Cricket Club gave rise to some emotional discussions. The Board still sticks to its opinion of last year, but at the same time did not want nor could refuse a request from the city council to have another meeting about this. Progress on this issue will be reported on website and in newsletters. Also the availability of Ground 2 (the natural grass football grounds) were reason for concern. The city council gave notice this week that it would be available only as of June 11, which both the GMM and the Board find completely unacceptable given the contract between parties. Here as well we have insisted on a meeting on short notice. The club said goodbye to treasurer Guus Beekhof. He did an excellent job the last three years and the chairman thanked him extensively for his commitment.In Geert Rutgers the club has found a very capable successor. Floris van Hoogdalem has been added to the Board as 7th Board Member, responsible for Equipment and events. Lex Nijhuis was appointed honorary member (Lid van Verdienste), welcomed by the GMM  by a warm applause. When closing the meeting at around 10pm, chairman Richard de Lange mentioned it will be his last year. Leaving the club another year to find a successor. But first and foremost we’re looking forward to a great 2016 season with lots of fun and success!