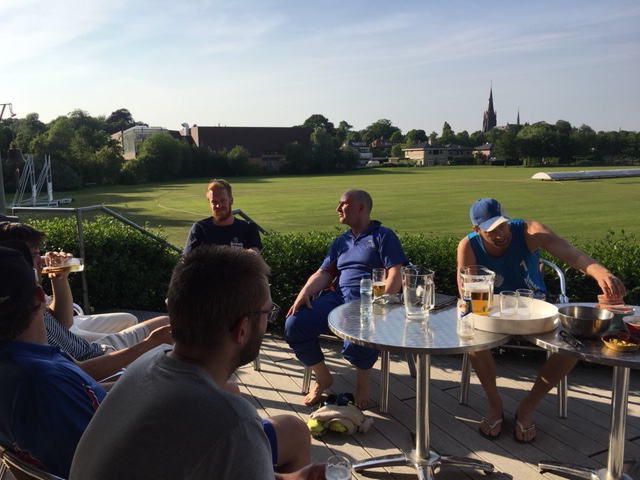 A few miles south west of where the Vliet joins the Oude Rijn the gentle banks of an old polder run straight and green The water is clean too, for it has fallen twinkling from the clouds drifting over the land from the North Sea. Spread over the polder, lined with youthful trees are horses, cos and sheep nibbling at the luscious cud.
Rabbits come out of the brush to sit and bask in the warm sun. Occasionally they raise their heads reacting to a shout of “Zami maiden” or a wide being clapped, they quickly return to their oblivion unaware of the artistry taking place on the neighbouring patch of grass.

Ajax of Leiden were the guests today and batted first. Six of them got in but could not take advantage; six falling in the range where the gentler sex are considered to be at their most suculent. Two were run out from direct three stump hits; Sander’s shy almost breaking the stumps, Aled’s dispatching out a pensioner who was sauntering without being safe. Mo’s 36 balls were very frugal, as were the combined 12 overs from Marek and Yves each picking up two. Pick of the bowlers was Pete (Ricky) Fowler, his 7 overs (2 wickets) of away swing proving a touch too good for our friends from Leiden. The run rate remined low despite the gallent attempts from Edward Straling to keep the match interesting. Ajax scored 175 for 8 after their 35 overs.
Oh sorry, Mark van Outeren also bowled.

Lunch was delicious, this week there was no repeat of Frits taking off his batting gloves, wiping his dripping brow and putting his sweaty bare hands directly into the salad bowl to give it a stir.
A notable mention must go to Martin Koster and his raillery during his bar duty, this conversation was overheard:
Random fellow: “Could I have a beer please”
Martin: “Sure, a pint or a half?”
Random fellow: “A pint please”
Martin (quick as a flash): “Sorry we don’t serve pints”

Scene three brings JW and Tom to their respective creases, they shared a magnificent opening partnership of 5. Mark vO replaced Tom and was soon joined by Ivo, JW falling one ball after sending the ball into a bush. The kin shared a partnership of 4, Mark’s singles accompanying Ivo’s dashing flails to the boundary. Mo replaced Mark but if you sneezed you would have missed his innings so we be polite and say Marek replaced Mark. Marek joined Ivo’s boundary fest, dismantling the bowlers from Leiden but alas Ivo succumbed when on 42 at 84%. Aled joined Marek and the two closed the game, Marek 59 no at 103%, Aled 30 no at 142%.

There that’s 500 words, pdf of invoice attached.
Oh and if anyone has some spare time this coming Thursday I have some patio slabs in my back garden which need