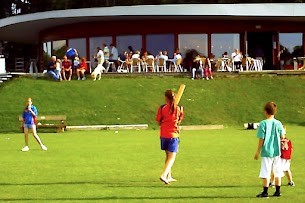 The first part of the season has come to an end. Last week we had the final club night before the holiday season. During a BBQ we celebrated the Dutch tile for the U14 EBAB and said a word of thank to all trainers and the people who made the club nights to such a huge success. Also, during the BBQ we organised a jubilee raffle and many won a price (Stijn, Merle). In August we will restart, the U10’s and the U12’s are still competing for the Dutch title. The seniors will keep playing their matches, also during the holiday period. In the mean time sweet memories remain. See also the pictures.