After a short season, which could only start on 1 July due to the Corona measures, the arch-rivals VCC and VOC U15 met in the final on Sunday 12 September. On the beautiful main ground of Voorburg Cricket Club, the two teams are equal opponents for a number of years, started the battle for the Dutch U15 Championship under radiant conditions. Again, it was an even battle, which was decided in Voorburg’s favor only eight balls before the end. The team that now forms VCC U15 continued a great series. After national titles in previous years in the U9, U11 and U13, they could now also add the national title in the U15 to their palmares.

VCC won the toss and chose to bowl first, believing they could restrict VOC to a reasonable total, and hoped to chase that successfully chase with a deep batting lineup. However, it did not immediately look like that, because the team from Rotterdam started furiously. Aided by quite a few nervous wides, they raced for about 6 to 7 runs per over and just before the drinks, VOC was at a comfortable 91 runs after 13 overs for the loss of 1 wicket (bowled Albert). In the 14th over, however, Francois took revenge for the 18 runs he had conceded in his first over. Thanks in part to a wonderful catch by Aadvik, he first clears dangerman Roman (34), and then immediately sent home the next batsman (caught Cedric). Two overs after followed by another wicket (bowled), making it suddenly 111 to 4 after 16 overs, with only Maas Heere (batsman number 2) remaining from the higher-order batsmen. And he continued to make runs with a certain regularity, but the run rate dropped, also because two more wickets fell. Carlijn showed that she is one of the fastest female bowlers in the Netherlands and took a wicket and finished with the nice numbers of 7 for 1 in 3. Alejo threw top scorer Maas (43) run out and then the wizard of Ypenburg Miraj, cleared the tail expertly (catches by Alejo and Cedric), leaving 159 runs on the scoreboard. That looked like a par score and was in any case much less than what it looked like halfway through, when a score of 200+ appeared to be attainable.

The start after the innings break was not great. VCC soon lost one of the opening batsmen, with only 9 runs on the boards. Fortunately, Shirsak and Alejo managed to get the chase back on track quickly, and they built a great partnership together. They raced from 51 after 10 to 77 after 15 and therefore constantly cruised at about 5 per over. At 95, Shirsak (34) got caught, but Alejo kept going and – well supported by Tom among others – built a great innings that only ended at 60 runs when Alejo retired with 60 runs. In the meantime he had leveled the score with Farhaan (13 not out) with 8 balls to go. Francois immediately put an end to it on his first ball by hitting the ball for 4, after which the festivities erupted at the Groene Zoom.

Under a lovely sun, the numerous spectators had enjoyed a U15 match at a good level. The breadth of VCC was decisive today, but both clubs can be proud of their teams. It would be strange if we don’t hear from some of them in the coming years.

After the match, Jos Heggelman from the KNCB presented the cup to captain Cedric. It has a nice place in the clubhouse. Afterwards, a delicious lunch was enjoyed at long tables with South African boerewors rolls, Indian paratha (potato stuffed) and chicken, Pakistani spring roll & samosa and Dutch cake. A beautiful cricket Sunday ended so in a very nice way. 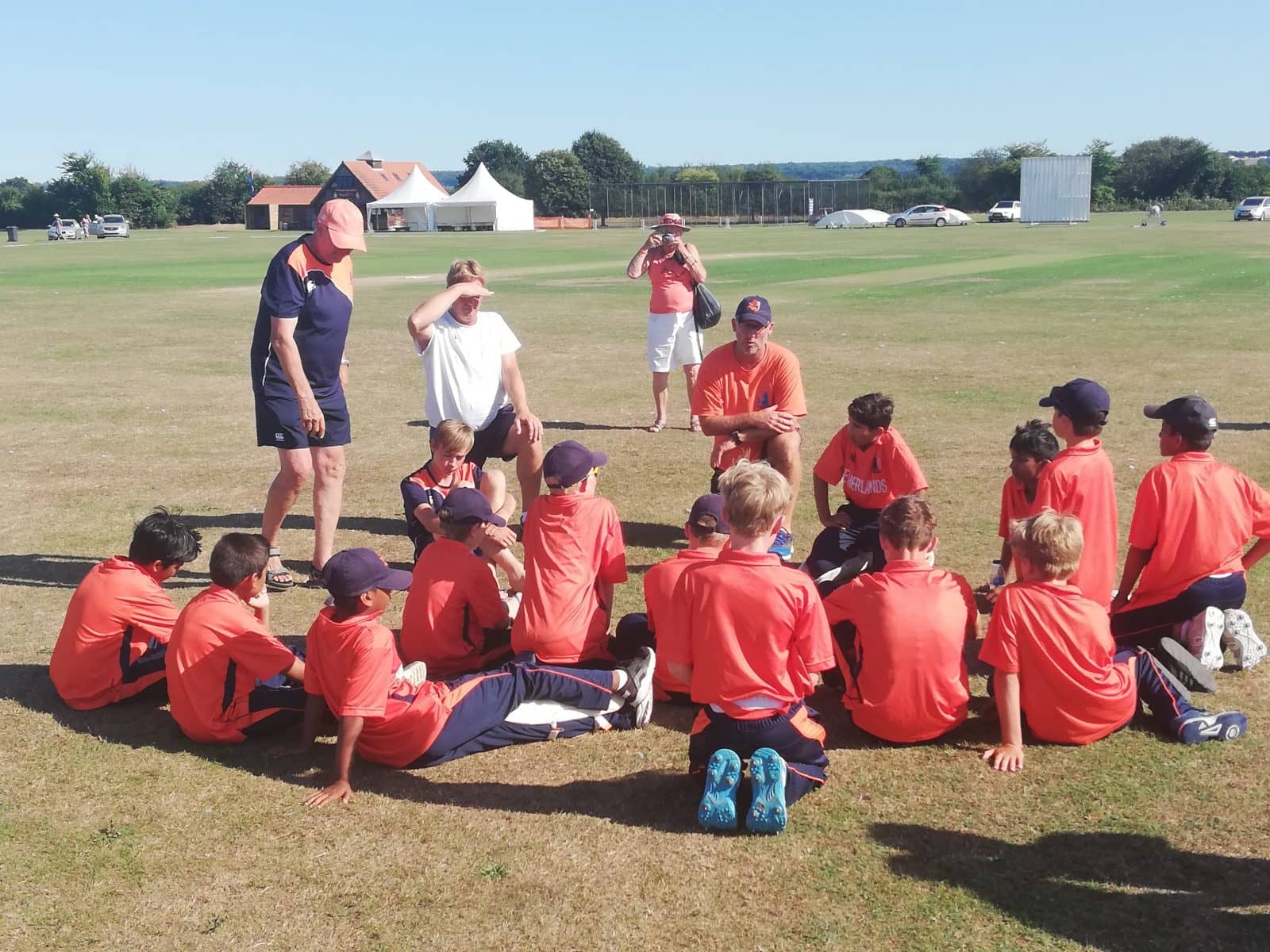 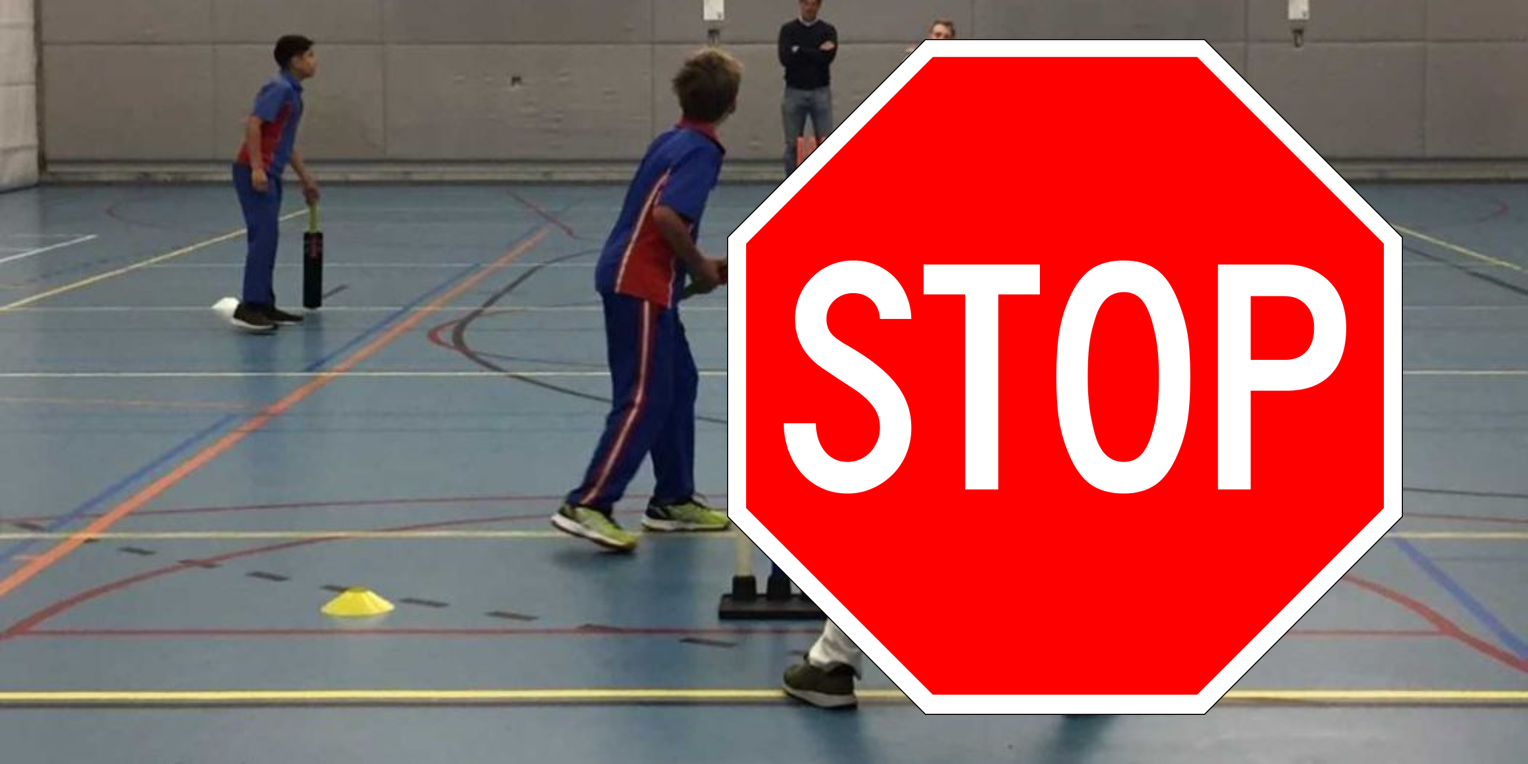 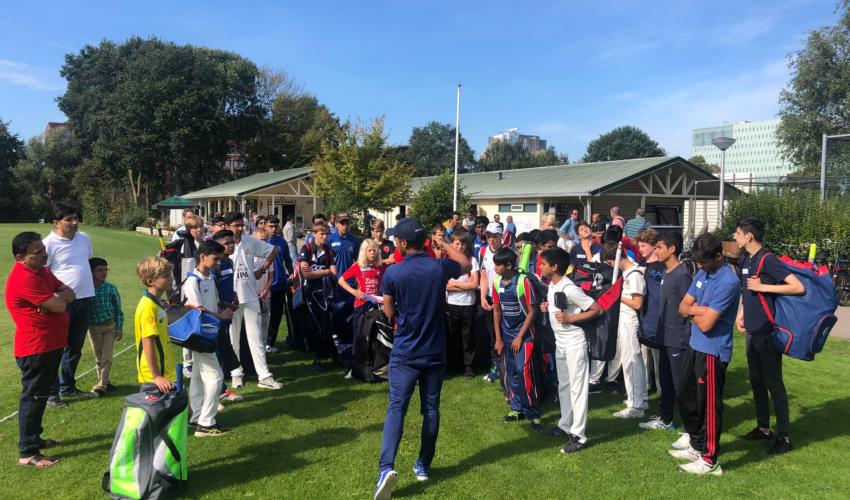