With the clear skies it was a perfect day for cricket. This time Zomi’s had to face Qui Vive on their home ground at VCC. On agreement from both sides the match was reduced from 35 overs to 30 overs. As usual Zomi’s lost the toss and were asked to field.
Charu opened the blowing with Suresh at the other end. Both, Charu and Suresh, began with the maiden overs. Qui Vive opened their account on the first ball of the third over with a boundary over covers. Charu in his second over, picked up the first wicket of the match. It was a gifted wicket as the batsman tried to reach a short pitch wide delivery and got an inside edge on to the stump. Charu continued his good spell and took another wicket in his third over. Richard stretch himself to his right as much as he could before the ball was stuck in Rob’s safe hands at the first slip. Suresh kept it tight from the other end and was in his third over when Deepak misjudged a catch at short mid-on. However, Suresh came back strong and took his first wicket on very next delivery, very well caught by Richard behind the wickets. The opponents were at 24 runs for 3 wickets after 8 overs.
Gaurav and Deepak started the second spell of the match. Gaurav began with a tight over giving just one run in it, while Deepak was hit for a six on his very first ball. But he controlled his nerve for the rest of the over. At the crease was a promising woman cricketer (Nidhi) to bat after the fall of third wicket. She defended few deliveries very well before getting out for a duck as caught behind, thus Gaurav claimed his first wicket of the match. The opponent got the momentum as the match progressed and reached at 56 runs for 4 wickets after 16 overs.

Then captain Kobus took the ball in his hand and got the well set batsman out as LBW on very first ball. Suresh joined Kobus to ball his last spell. The opponent picked up Suresh’s length and hit couple of boundaries and a six before Suresh picked up his second wicket on the last ball of his final over, a good catch at first slip by Rob. Then Charu joined Kobus for his last spell. Charu picked up his third wicket of the match in his last over as caught and bowled. By then the opponents were at 111 runs for 6 wickets after 24 overs.
Then Gaurav was back for his last spell and picked up his second wicket of the match in his fifth over. What a fabulous catch by Rutger at backward square leg, the ball was travelling like a rocket. Deepak bowled couple of no balls over the batsman head before giving up in his last over with stiff shoulder and five balls to spare, thanks to Colin for completing that over. In effort of maximizing the last over, the opponent lost their eighth wicket as run out and put up a score of 153 runs at the end of 30 overs.
Then came the best part of the match, the lunch time. Thanks to our strike bowler cum the chef Charu for the delicious and satisfying kip curry meal. 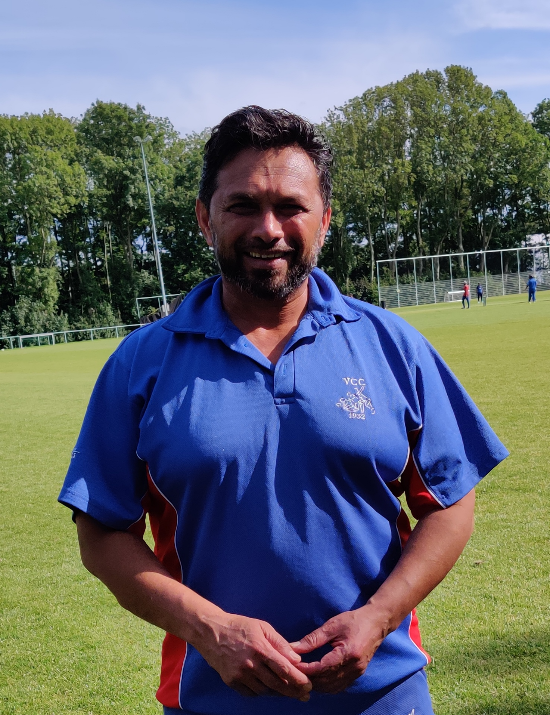 Zomi’s needed 154 runs to win from 30 overs, with required run rate of 5.13 per over. Rutger opened the inning with Rob at the non-striker end. A perfect start for the Zomi’s as Rutger hit a boundary to square on very first ball of the inning. Rob at the other end was struggling a bit to connect the ball. The opponent soon broke the opening partnership in third over when Rutger got an edge behind the wicket. It carried very low, however the wicket keeper stretched himself to his right to complete the catch. Rutger went to pavilion on an individual score of 5 runs. Gaurav came as one down and showed some intent with couple of consecutive boundaries on opponent’s fierce bowling attack. Rob was doing well at the other end. However, the opponent did not allow him to settle and he got out bowled after being survived on couple of close LBW calls. Rob got out on 12 runs. At the end of 6 overs, Zomi’s were at 39 runs at the loss of 2 wickets.

Charu was sent up the batting order. Gaurav was on 14 runs and could not resist himself. He kept on hitting aerial shots, one of which found the fielder at mid-on. That forced captain Kobus to come in and take responsibility on his shoulder. Charu made 4 runs before getting run out. Then Lennaert joined Kobus. With Kobus at the crease, what Zomi’s needed was just someone who can stand alongside him. Lennaert did his best to stay there, but in vain. He got out caught behind after making 3 runs. The opponent were well in control, as Zomi’s lost 5 wickets on 65 runs in 13 overs.

Richard came in at number 7 to join Kobus, but could not stay long and was out caught behind after making 1 run. Then Deepak came in at number 8 and got out LBW on a duck. Captain Kobus was scoring steadily from the other end while Colin joined him. They stuck in there for some time keeping Zomi’s hopes still alive. Alas, what a stunning catch at point to send well set Kobus back to pavilion. He made the highest individual score of 25 runs from Zomi’s side. That left Zomi’s only to crumble.

John came in at number 10 when it needed more than 50 runs to win with sufficient overs in hand. The aim was only to stay on the crease and play all 30 overs. But it did not happen that way. John got run out on a close call by Colin, he made 1 run. Then the last batsman Suresh came to the crease. As opponent were certain that they are going to win, they handed over the ball to their woman cricket (Nidhi). While Suresh was facing her, she showed no mercy and came strong on her third delivery and banged. Suresh was bowled out for a duck. Colin remained not out on 9 runs. Zomi’s were all out for 103 runs after 22.3 overs.

A great win for Qui Vive and heart breaking defeat for Zomi’s with a deficit of 50 runs. Hope Zomi’s will forget this defeat and will come back strong in their next game. Till then, bye bye!

Revenge for the Zomis vs Qui Vive

Revenge for the Zomis vs Qui Vive