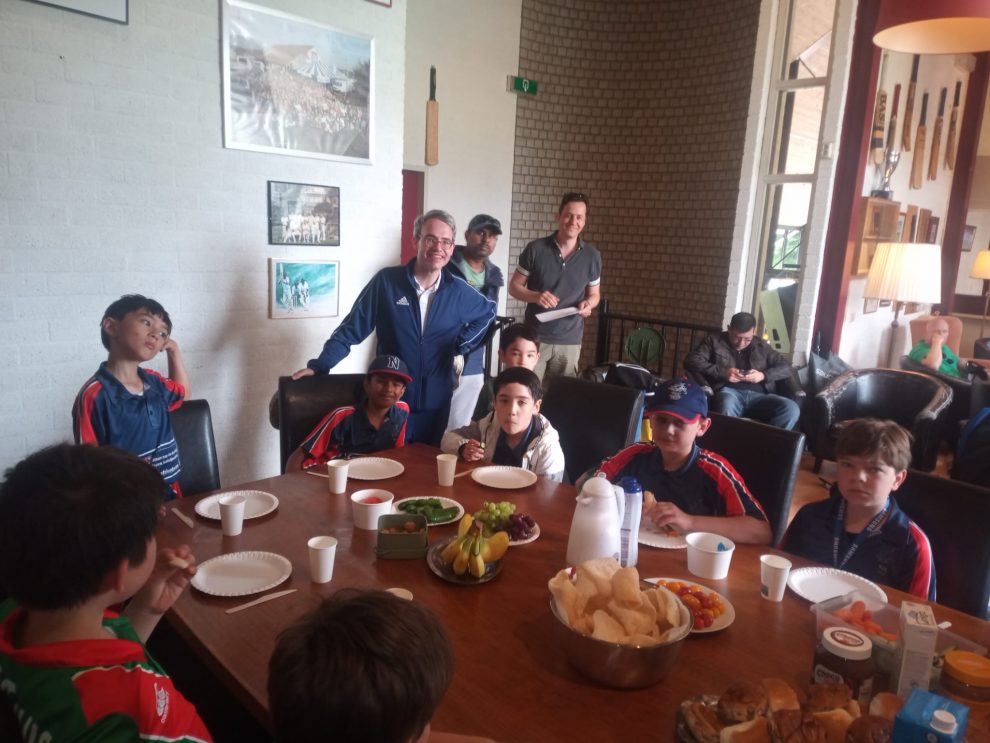 Our team consisted of: Branko (captain), Arthur, Aurelio, Enrique, Reuben and Samanth. Our captain Branko won the toss and decided to bowl first, so we would know the target when chasing. Highlights of our fielding innings: Top wicket taker was Aurelio with 3 wickets in his 4 overs (bowled, c&b and hit wicket). Arthur took two wickets (bowled and a caught behind by wicket keeper Reuben). One wicket also for Branko and Reuben. Impressive and very economical was the bowling by Samanth and Enrique: Enrique bowled 13 dots out of his 18 balls and produced a run-out on his own bowling (together with his brother Aurelio).
Samanth produced the other run-out, literally outrunning the MOP-batter;-) Overall we bowled only 12 times a wide or no-ball. Quite disciplined I would say. Also tidy wicket keeping by Enrique and Reuben: only 3 byes in the whole innings.
A word of thanks to MOP who lent us a seventh fielder. Our guest players fielded very seriously and helped us save runs. (It is not always like that…). The top scorer from MOP was their ‘giant’ batter Lucas (as tall as I am) who hit 11 (!) fours in his 33 balls (he batted twice) although he was also bowled twice.

Highlights of our batting innings :
Our target was 129, but with 9 wickets we already started with 27 bonus runs. Captain Branko took the reponsibility of opening the batting with Aurelio. They could not hit all balls because MOP bowled many wides and very slowly so that it was difficult for us to score boundaries (the slow outfield didn’t help either). But in all, after their batting overs were over, the partnership was worth 35 runs at the expense of two wickets (Branko was bowled twice). Next in were Arthur and Reuben. This partnership upped the tempo and they added 52 runs in their overs. Arthur was the more aggressive partner, hitting 4 fours, and he was well supported by Reuben. The running was good and helped convert some singles into twos. The small price Arthur had to pay for his aggression was that he was caught once.The final batting pair of Samanth and Enrique had to bring home the match. And they did! Samanth had most of the strike and hit 7 fours in his 33 balls. Enrique faced fewer balls, but his single four could also have been a six (we umpires weren’t sure). But most impressive was the running between the wickets: many singles were turned into twos. So, in the end, this partnership had added 80 runs, at the expense of only one wicket (Enrique was caught behind trying to hit a bouncer).

After the match both teams enjoyed a great lunch in the clubhouse and the players cheered the good harmony in which the game had been played. The VCC kids were proud of the result they had achieved: 167 runs + 27 bonus runs = 194 for VCC against 129 + 12 = 141 for MOP.

So, our second outing this season to MOP turned out to be even better than the previous one. Many thanks to the players, in particular captain Branko seconded by ‘vice captain’ Samanth for their captaincy. Karthik, Stephen and Catherine did a great job in preparing the batters for their task. Tonnie was, as always, the perfect scorer. And then we had the additional support of our Peruvian-Swiss supporter Luis. I took the honours of coaching this great bunch of kids and of the umpiring. It was worth it, offering the kids of both teams the opportunity to play some nice cricket in bright ☀️ sunshine.