On a sunny and warm day, we were ready to take on Ghausia CCF at our own first ground. After two wins in a row, VCC looked to maintain their winning streak and dominance in the competition. Captain Floris won the toss (finally…) and elected to bowl first. We had three changes as Navjot, Nehaan and Alyan were back in the team. 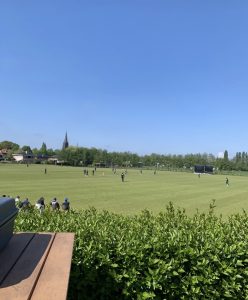 It was Navjot playing his first game of the season, opening the bowling with Sajjad. Navjot didn´t take long to take the first wicket and was in some rhythm. On the other hand, Sajjad was bowling a gem of a spell where he took 2 wickets for 13 runs in 6 overs, and he was unlucky to not have one or two more after a sloppy start in the field. After 10 overs Ghausia was tottering at 29-4 caused by a superb show of fast bowling. The opening spell really set things up for the medium pacers and the spinners. Ricardo bowled a very tight spell going for just 14 runs in 7 overs (very unlucky not to have a wicket). Amrit struck in his second over and treated us with probably the celebration of the year. After this half of the side was back in the pavilion for just 49 runs. Miscommunication and some good fielding by Jakes caused a run out in the very next over. There was a bit of resistance by the tail who batted more sensible than the top order as the last four batters managed to put up 63, but it didn´t last long because of some good spin bowling by Jakes and Shirsak. The two youngsters picked up 3 wickets in total and bowled the tail off. Ghausia managed to only get 114 on the board after batting 36.4 overs in the first innings. VCC again with a lethal bowling performance and impressive fielding (including the keeping of part-time keeper Floris) gave nothing away to the batters. Well done to all involved!

After some delicious pasta made by Nehaan, Laurens and Amrit (thanks guys) our batters were up for the chase. Jakes started steadily whereas Nehaan went for those quick runs and scored an important 17 of 25 on a tough wicket with a dodgy back. Harold and Jakes then took the team to the 50-run mark and looked pretty solid and set on this pitch. Suddenly Ghausia struck thrice in quick succession and VCC was 71-4. VCC was in a spot of bother when Alyan and Lau raised their hands up and chased the total down in no time. Both batted with great intent and took the spinners on beautifully. It never looked like they were in any trouble. Alyan scored a neat 33 in his first game in a year and Lau supported him with a useful 13 of 13 balls. It took 32.4 overs for VCC to chase the score down for the loss of four wickets. So, with this win, VCC stays unbeaten with 6 points and makes their winning streak longer. Next week we will be playing against Qui vive at home (again) and will be looking to grab the top spot at the table. Thanks again to Lau, Nehaan and Amrit for organizing the lunch and Emiel for scoring. Bring on Qui vive!