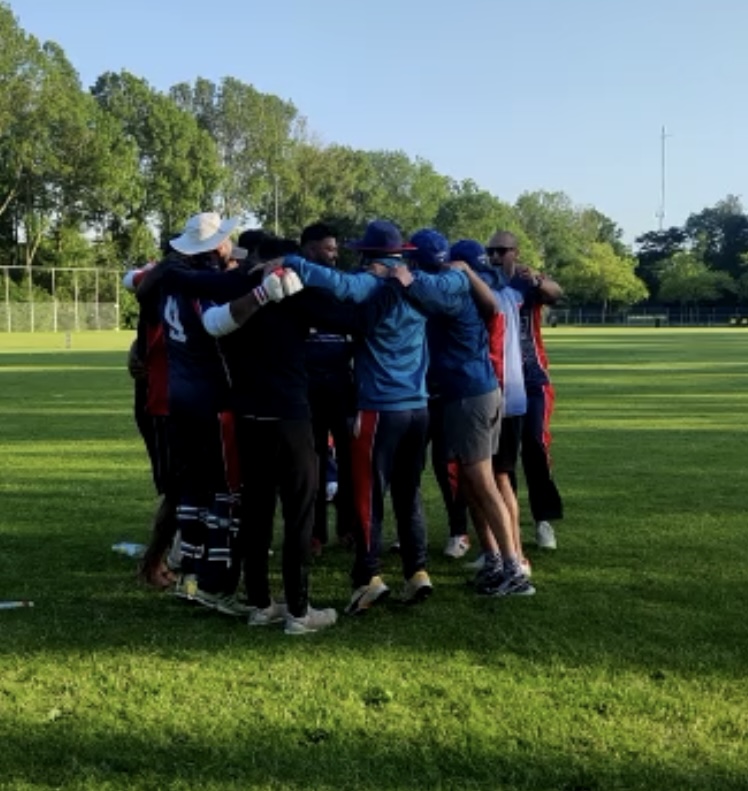 Just like VCC3, VRA 5 was promoted from 3e to 2e klasse (but from the other pool). They were one of the dominating teams up until this match. VCC was determined to win this contest. The pre-match week saw dedicated training sessions.

VRA won the toss and elected to Bat first. VCC 3’s strategy was to bowl first and restrict the opposition to 180runs.
Sono & Amrit opened the bowling. Some rusty bowling initially gave them a decent start. Amrit induced a drive to get the batter (captain) caught by Darryn at short cover. He was hit on the chest; a few moments of anxiety followed the initial exuberance, but he was soon okay.

Some half opportunities followed in Sono’s spell, but they did not culminate into a wicket.
Naman and Pranav came in as first change, a surprise move by the skipper to get himself to bowl. Pranav choked the runs in the middle overs and bowled immaculately ending up with figures of 4o,11r, but unfortunately, he remained wicket-less. Naman ended with 6o,1m,19r,1w.

Dinesh and Ashish continued the bowling effort in a pair. DJ dismissed the 2nd opener.
Vishal was introduced in the 27th over. In the quest to increase their scoring rate, they took on Vishal’s bowling. A couple of easy-to-hit deliveries gave them the required momentum.

Darryn was introduced to give a burst of speed and breakthrough, he was successful to get the 3rd batter (50+ runs) caught out by Naman at long-on. The 5th batter could not clear the long-on ropes of DJ’s bowling, Amrit’s outstretched hands swallowed the ball from the air. Gaurav served the team’s interest well as the 12th man.
Clever cross-seam delivery by Naman outwit the 4th batter (50+runs), who perished to a well-judged catch by Darryn at long-on. Score now 188/5 in 37.1 overs. DJ got two other batters out in quick succession, the first to a great running catch by Naman & the other lbw. Amrit scalped the 6th batter, caught by Rk at cover. VRA ended at 204/8 in 40 overs.

VCC 3 batting innings set sail with Abbas and Darryn at the helm. Both looked at ease and tackled the opening bowlers well. Darryn couldn’t reproduce his dogged play of the previous match and got dismissed by a catch at mid-on whilst trying to repeat a short he had earlier hit for a boundary. Naman joined in and looked solid. VCC got the second jolt when Abbas got run out crudely due to miscommunication. Score 31 for 2.

Naman and Jenagan steadied the score to 75 runs. Both got out on successive deliveries whilst trying to play ambitious shorts. Rohit, at number 5 also cheaply perished to an lbw decision.

DJ at the 7th position got bowled out cheaply. VCC was now languishing at 88/5 in ca. 21.2 overs. Amrit (6th batter) continued to slug it out as a lone warrior (trying to accelerate) until Sono (at 8th) joined and played some good shorts. Just when he was showcasing his legendary hitting abilities, he got out to a catch at deep mid-wicket. The team awaits Sono’s return to form (with both, the bat and the ball). Pranav could not create the same impact with the bat as he had done with the ball earlier. Score now: 133 for 8 in 32.3 overs.

VCC needed 72 runs in 46 deliveries and 2 wickets in hand. Time for the big man to take centerstage, Ashish announced his arrival in grand style by hitting a boundary back past the bowler. The souls didn’t move an inch. He continued to unleash his thunderbolts, he toyed and clobbered the bowling by hitting monstrous sixes. He briskly scored 38 runs in 21 balls whilst trying to further punish the bowlers, he was caught out Score now: 189/9 in 38.5overs.

Amrit and Ashish partnered for 56 runs. VCC still needed 15 runs to win. The opposition skipper decided to bowl himself in the last over whilst their opening bowler was still available and had the best bowling figures of the lot. Although with the power of hindsight, Naman and I, believe this was a tactical blunder by their leadership. Such instances demonstrate how an incorrect decision by the leadership can overshadow the team’s efforts.

Amrit took it upon himself to guide us to victory in the last over. He hammered two successive sixes under pressure bringing a calm to the excited peripheral audience. The score levelled at a wide ball. By this time the team was preparing celebratory moves. Vishal brought down the curtains in style by hitting a boundary. He cherished his 200-strike rate. Both Amrit and Vishal remained unbeaten.
Score: 208/9 in 39.5 overs. VCC won!

Thanks to some of our vcc4 team chaps and Kashif, who came by and cheered for us.