As defending champions VCC U13A rolled through the group stages quite comfortably. Nine wins in nine matches with some big wins and only one scare moment when Punjab almost snapped the win on VCC home turf. But all in all, a convincing campaign in May, June and July, leading to the semi-final that would be played on one day in a mini T20 final’s Day, only would all matches be played in 25 overs.

It was the perfect set up at VOC, Rotterdam for a confrontation with Quick 2 , which ended as no. 2 in the group where also the VCC U13B team played (and ended as no.4). Ambience was amazing – bright sunny day of 19°C temp, with moderate wind, music and cheer leaders, drinks and foods, parents, coaches, organizers and supporters – full of cricket lovers across all generations gathered to enjoy this fabulous sport at the end of the season! Match started at 13:00 hrs when VCC opted to bat first after winning the toss.

Cedric and Shirsak went to open the innings and Quick 2 began the attack with their spinner. Cedric opened his and team’s account with a boundary on full toss in the first over. 50 run opening partnership came in 8 overs and then opponent captain made the bowling change. Cedric got his life when deep mid-wicket fielder could not hold an easy practice catch, but Shirsak dragged the next ball to the stumps – total became 53/1 in 9th over.

Next batsman Tom came in the middle and began with a beautiful cover drive. The solid partnership between Tom and Cedric brought the total to 89/1 after 12 overs when drinks break was taken. With the flurry of runs by VCC batters, some great fielding by Quick 2 was earned lot of applause from the crowd – particularly their girls who demonstrated great anticipation, reflex and athleticism. Right after drinks, Cedric retired with 51 not out with some great shots all across the park and VCC was 104/1 after 13 overs.

Farhaan joined Tom and another partnership started building which got an exciting impetus when Tom hit 4 boundaries in 16th over and brought the total to 142/1 and completed his half century. Alejo came in the middle to join Farhan as Tom retired. Both of them displayed aggressive brand of cricket which made the score 200 up in 22nd over. In last 3 overs, all the guns were blazing from VCC where Farhaan hit couple of sixes (a serious number!) and remained bit unlucky with one short of half century and at other end Alejo’s cameo innings ended at 37 not out. Finally, winning target of 248 was set for Quick 2 in 25 overs.

Quick 2 openers took off the guard with a near impossible asking rate of 10 per over against the defending champion. Steven opened the bowling attack for VCC with 3 wide deliveries. Next over by Aldino – even more wides. Quick 2 reached 26/0 in just 4 overs by hardly hitting any ball. First breakthrough was given by Miraj when Quick 2’s opener was caught by Francois at point in the 5th over. Batting side crossed 50 in 7th over where extra was more than 30. 2nd wicket was fallen at 60 in 10th over when the batter was clean bowled by Francois.

Then Quick 2 started building the partnership – but Shirsak spoiled their hope when his chinaman delivery deceived the batsman and forced him to give a catch to Tom at slip. A simple catch at mid-on of the next delivery was missed which gave a breather to Quick 2. However, Shirsak struck again with his flight when Cedric stumped brilliantly in the last ball of the over. Another catch was missed – this time in Miraj’s over. Few sloppy fielding by VCC was on display, but that was not enough to turn the fortune in favor of Quick 2, as the next victim was caught and bowled by Francois in 18th over when total became 82/5. Just before Quick reached three figure mark, Shirsak got the third victim in his kitty with a caught and bowled – score became 99/6. Seventh wicket was an outstanding ground fielding by Carlijn with a stunning direct throw from mid-on to the bowler’s end and total became 107/7. Finally Alejo sealed the fate with another caught and bowled by packing the opponent in 113 in 22 overs.

Despite enormous extra runs (49 runs!) rewarded to Quick2, few missed catches,  it was pretty one-sided match where VCC children were way ahead in all accounts and deservingly made their path to the final to defend the trophy.

At 16:30 hrs the defending champion and tournament favorite VCC was ready to take on the last challenge against Quick 1, the no.2 in our group and winner of the first semi-final versus hosts VOC. They organized the whole Sunday as true cricket carnival with all kind of fun elements along with super facilities. Boys were ready to give their last punch in the tournament even they played back to back matches – no sign of tiredness and why would they be tired? They were just 50 overs away from the beautiful trophy. Crowd was equally enthusiastic and cheerful throughout – what a great Sunday outing!

VCC skipper Cedric won the toss and elected to bat first, but they changed the batting order drastically from the semis. Danial and Miraj took the guard for VCC and they started very cautiously. It was 15/0 in 4 overs (courtesy to 11 extras!) unlike to VCC standard in the tournament so far. First time the ball crossed the rope in 7th over, when Danial’s willow hit it through the cover and end of 7 overs score became 32/0. Teammates were shouting to accelerate the pace of the innings and the openers decided to change the gear.

Soon after Danial got a breather when he was dropped at cover, but the luck did not last long as he got run out at 22 by the same fielder while accelerating the run rate. It was 43/1 in 10 overs. Carlijn came in to join Miraj, but second wicket fell when Miraj was run out by a superb fielding from Quick 1 fielders while completing 2nd run. 49/2 in 10 overs.

Tom joined with Carlijn and started stroke play from where he retired in the semi-final.  10th over was ended with a magnificent cover drive bringing the total 55/2. Then few interesting happened – Tom got his life when the catch at fine leg was nullified by square leg umpire due to no ball due to an above shoulder height full toss. Quick 1 fielders were surely disappointed and the umpire made them understood rationale for no ball call. Carlijn survived very close from a run out, but unfortunately was forced to retire due to ankle injury. Luckily it did not get worse for her, however VCC lost the momentum.

Captain Cedric walked in to the field to build and boost the innings when total was 70/2 after 11 overs. When everyone was expecting their partnership would provide necessary momentum to VCC innings, Tom’s innings came to an abrupt end when the umpire showed the finger up for an lbw shout. Tom appeared dissatisfied with the decision, but the umpire was the boss. Soon after Francois got bowled and the total became 78/4 after 13 overs – drinks break was taken.

Everyone in VCC camp became nervous – would it become the only defeat in the season? But Captain took up the responsibility along with new comer Farhaan and after hitting couple of boundaries total jumped to 90/4 in next over and century mark crossed in 16th over. The partnership was gradually getting stronger and after solid stand of 69 by this duo, Cedric got bowled while attempting an adventurous reverse scoop while score reached respectable 157/5 in 22 overs.

Meanwhile Farhaan hit the maiden six (a serious number!) and along with Alejo again added 24 runs in last 3 overs to post a pretty decent total of 181/5 after 25 overs. 68 extras including 59 wides and no balls were clearly the indication of Quick 1’s bowling indiscipline. However that did not take away the credit of VCC middle order who made a great come back.

It’s a big match – knock out final! Quick 1 needed a good start and VCC required early breakthrough. Fortune tilted towards VCC when Alejo brought the joy in VCC camp as early as in 2nd over by sending the opener (who scored a rapid 50 in the group stage match) back to pavilion when Tom took the catch at mid-off. Then Quick started to rebuild the innings and when they were about to put the opposition in pressure, Farhaan did the trick with his magic hand! In the 10th over, three middle order batters simply surrendered in front of Farhaan’s leg spin! Batters were clueless against the turn, all are bowled – this over almost sealed the fate of the match! The score became 52/4 from 46/1 in the span of six balls and five minutes!

It again proved how fascinating this sport is! Still it’s cricket – the game of uncertainty and it’s the final! Quick 1 did their best to put up a fight and made some moderate partnerships to bring the total 96/5 in 16th over – but Miraj, another talented VCC spinner did another havoc by sending two lower order batters in consecutive deliveries in 17th over. It then became a matter of time for VCC to lift the trophy as the score was 96/8. And when Cedric gave the ball to Farhaan in 18th over – he was quick to finish the opponents and made sure VCC retained the trophy in 2019! Farhaan ended his day with a match-winning 32 not out in crucial juncture and decimating spell of 3-0-20-4 which made the final winning pretty easy at the end!

At the end, the trophy was handed over to winning captain Cedric and VCC came out as deserving winner of the league remaining unbeaten throughout and almost won all the matches with ease and comfort barring one or two! VCC U13 team consistently gave all of us immense pleasure and joy in last 5 months by their performance, passion and energy – very promising future for VCC and as a whole for Netherlands cricket provided these young bunch keep up their hard work and remain committed for further excellence and adequate exposure & opportunities come along the way.

Finally, a big thank you to the opponents, the scorers, the coaches and the hosts VOC Rotterdam who made it an unforgettable day for many. 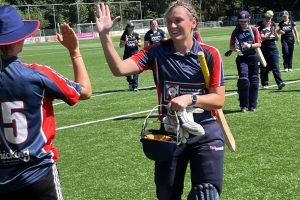 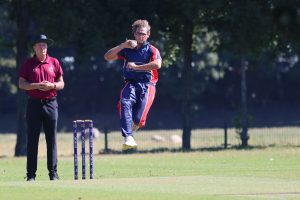 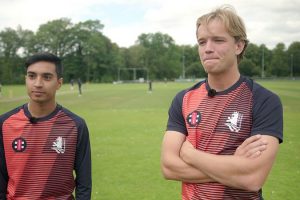