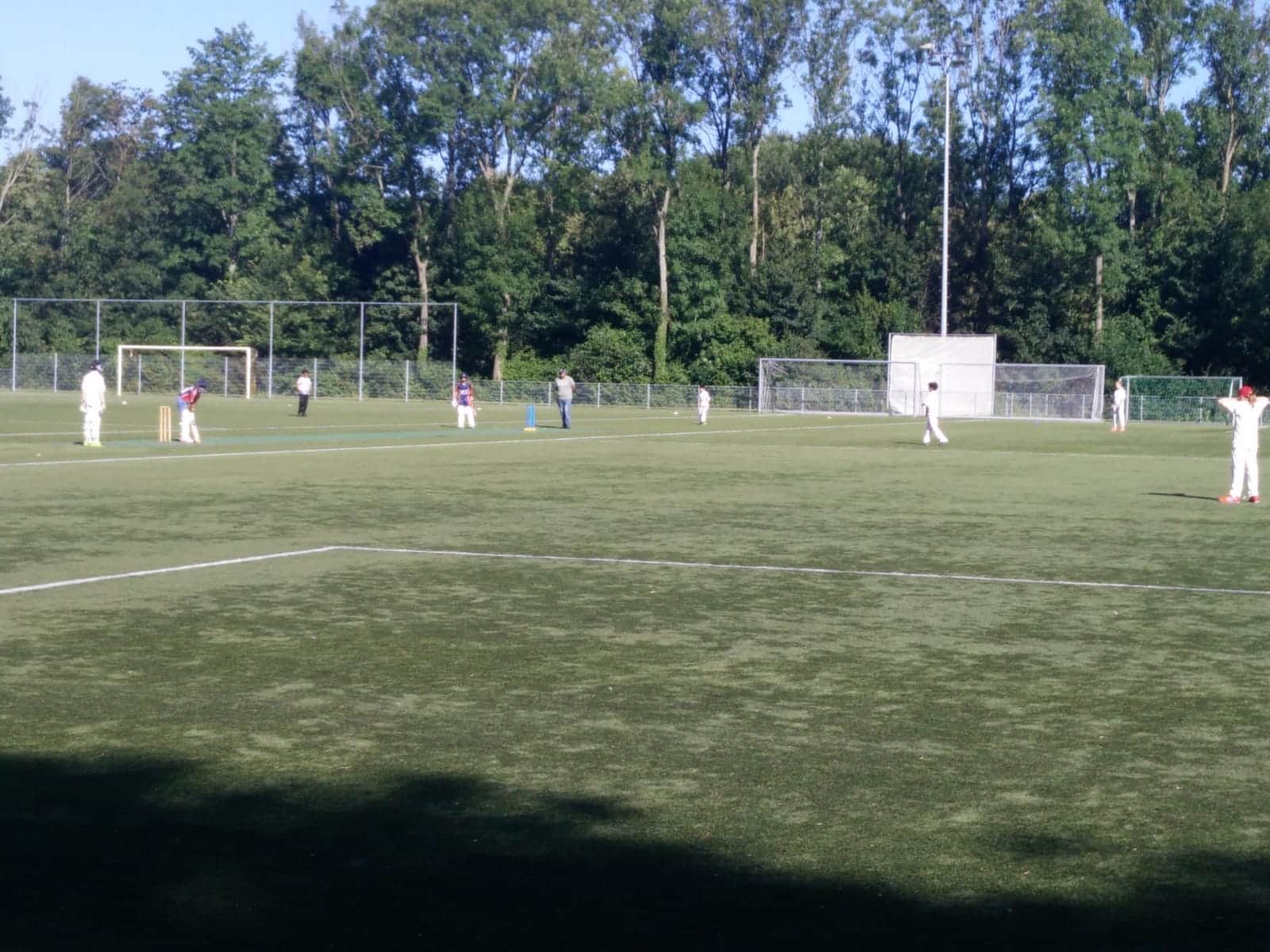 VCC, 29th June, 2019: It’s one more hot and sunny day in the season when VCC under 13A team took the ground against R&W – mercury already touched 20°C at 9:00 hrs when the match began and it soared up gradually to 29°C when it’s ended. It’s the home match for VCC, but again in artificial wicket in Field 3.

VCC captain Cedric won the toss and opted to bat first. Shirsak and Alejo opened the innings for VCC. R&W field placement was great and more importantly bowling was according to the fielding – as a result VCC was able to cross the rope only twice till 6th over. However good communication, running and clever rotation of the strike between the openers ensured the run rate always above 7. Boundaries started coming regularly from 7th over along with several cheeky and sneaky ones and twos. VCC accomplished century stand in opening partnership in 11th over. Sun was already pretty intense and top of the head, few sips of drinks were allowed to the batsmen to get rid of the sweat and fatigue. 1st official drinks break came after 12 overs while the score was 124/0. Shirsak retired after another stylish half century (53 not out) at 13th over while the total score was reached at 134/0 giving enough indication for a mammoth total. Alejo started firing with all cylinders and new comer Danial played a little cameo innings before he got clean bowled by R&W’s medium pacer Joshil and it’s the first wicket down for VCC at 150 in 14 overs. Aldino joined Alejo and welcoming the bowlers with couple of boundaries and then Alejo’s superb innings came to unfortunate end – just 1 short of half century. Although the ground fielding of R&W was good where the tall girl, Nicola stood out among others and few VCC wickets fell in regular interval, the fielding side found it too difficult to contain the pace of the innings. Kudos to the middle order and lower middle order’s contribution – comprising of Steven, Francois, Cedric and Tom. Steven got run out while trying to steal a bye from wicket keeper’s fumbling and Aldino too got run out while pushing hard to convert one to two. At the end, last few overs Cedric and Tom smashed all around the park while Tom hit 1st six of the innings in the very last over and final score stood 254/5 in 25 overs – which was an uphill task to chase by R&W against strong VCC bowling and fielding.

After hydrating enough players walked under the sun again and to everyone’s surprise Shirsak stood behind the stumps instead of regular wicket keeper Captain Cedric who started leading the team from cover and mid-off area. R&W opening pair started cautiously and did not loose any wicket till 9th over when Farhan clean bowled the opener and score became 41/1. Asking run rate started galloping every over and it seemed at half of the innings that R&W would be glad to play full 25 overs without any real chase to win the match. VCC bowlers continued to display another great performance to complement their batters. Miraj was very economical, but remained without success. Francois took two wickets in one over and made R&W further defensive. With presence of mind Shirsak stumped R&W’s middle order batsman in Danial’s delivery where batsman was bit lazy to bring his bat down and the feet was on air. Farhan was bit unlucky to miss another wicket due to no ball call by the umpire. Cedric got his first wicket in the season and Steven too bowled one. Finally, R&W concluded their innings at 116/6 and courtesy to Tom for extended last over due to 3 wide balls. It’s yet another handsome win for VCC after last two tough fights against Punjab and Sparta.