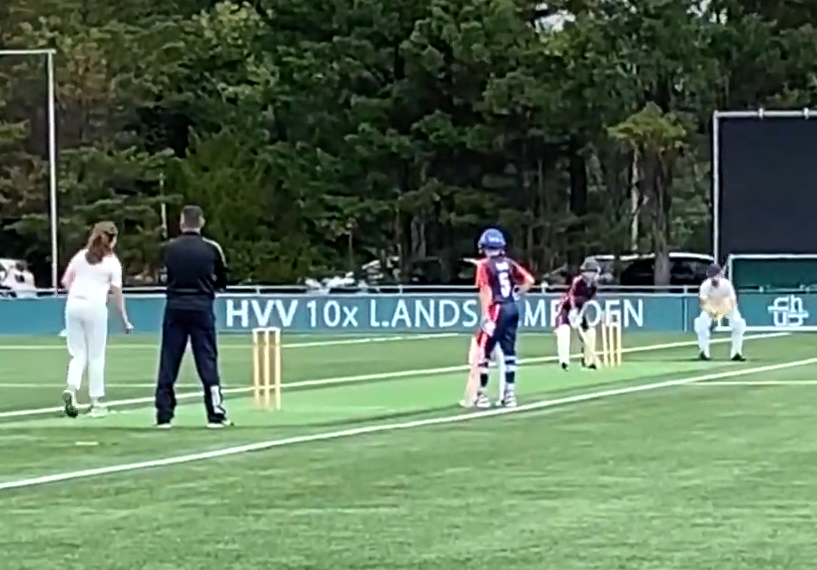 After disappointing Saturday (washed out), another friendly away match against HCC was on Sunday for VCC U-15. Although the weather was overcast and with strong wind, the will power of the children was adequate enough to defeat the adversity of weather. Luckily, it was dry – and gradually sun was shining at the second half of the inning.

VCC skipper Cedric won the toss and elected to bowl. Although VCC opening bowler, Alejo clean bowled the opener of HCC in the first over – perfect start in overcast weather. But then HCC built the rock-solid partnership with accelerated run rate. Both number 2 and 3 batsmen was retired after putting the team total very strong. But next string of batsmen and batswoman could not capitalize from there much. Some sloppy fielding of VCC also contributed to opponent’s score of 171 at the end of 25 overs.

VCC began their innings with Pradyumna and Farhan – except some cracking shots from Farhan, we were losing wickets regularly. When HCC was really dominating the match, Cedric and Tom focused to build the partnership with controlled aggression. Their partnership brought VCC to a stage where 24 runs were required to win in 3 overs! It was great to watch the understanding, running and stroke play of both these players. After Tom’s departure, Alejo came in and provided good support to Cedric who was well set. After Alejo got run out (which was not a run, but it’s an example of great teammanship mixed with sharp planning to give Cedric strike). Finally it became a nail biting finish when Shirsak joined the party only to run – as Cedric was on strike – VCC needed 2 runs from 1 ball to win. Excitement ends when Cedric sent the ball to deep fine leg and they completed 2 runs – truly Captain’s knock. Great Sunday and fantastic match at the end.

Video (watch the last over!)