A flutter of panic began some 5 days before the game between VCC and VVV, when miscommunication
saw the match venue change from an away game to a home game. No bother come Saturday however,
when both teams were promptly present before 1pm. This was where any promptness ended however,
with the game finally commencing late at 13:43. Captain Sander, winning yet another toss, nobly took it
upon himself to stop hiding down the order and open the batting with Martin. Wides opened their
account before either batsman however, 2 of them in fact before Sander pounced on the first legitimate
ball of the match for four. 6 off one ball, everyone was jolted into action!

The opposition bounced back however in the second over, taking the wicket of Martin (bowled) with
some handy use of the new ball. This brought Auke to the wicket, who together with Sander added a
further 42 in 8 overs for the 2 nd wicket, a partnership which reinstalled a sense of calm after the early
wicket, before Auke was bowled for 15. The captain continued to score freely, with new partner Gijs who
himself produced a brisk 14 from 16. However, both batsmen succumbed to the bowling of
Sumghershanan (who ended with a 4fer) in the 14 th over, Sander ending on 40 from 37. The calm had
therefore dissipated once batting allrounders Nick and Stefan resumed proceedings on 99-4. The
surmounting pressure potentially led to the downfall of Nick for 1 in the next over, now the fifth
batsmen from five out bowled. 99-5 from 14.2 now.

With the need for runs low, but necessity to retain wickets obvious, Chris and Stefan went about the
rebuild. Both soaked up the pressure, first taking just 5 from the next 2 overs. Scoring picked up again
thereafter, the pair hitting 6, 6, 15 then 6 from the 17 th through 20 th overs, the score now 137-5.
Eventually, the partnership was broken in the 23 rd over for 56 runs, Chris chipping a leading edge to mid-
wicket had to depart for 30 from 31.

Stefan assumed the responsibility of guiding the tail as Floris joined him, only to push for one quick run
too many and be out gracelessly tasting the artificial wicket as his dive was not enough to get home for a
second. A well made 16 under pressure, nonetheless. Only 2 balls later, Floris was out caught for 11. Still
9 overs remained with just 2 wickets in hand. With VCC now in danger of being all out and not using up
the 35 overs, Arnie corrected the ship’s course with a brilliant 37 from 28, his Bazball style of attack
proving the best form of defense, carrying the score to 222 all out (33.3 overs) with Yves (0) and Frits (4)
foiling him at the other end. A healthy score to defend, regardless of the 9 balls left out there.
Resuming the match after the lunch break, the VCC fielders took to their positions with Chris at the top
of his mark. Bizarrely though, it took a further 10 minutes for the batsmen to emerge, one of whom
could only hold the bat with one hand following an earlier dropped catch. Eventually the second innings
got underway with the first over containing a wide, a boundary and a beamer. All Zami normality
restored then.

Nick applied pressure at the other end, taking the first wicket with only his 9 th (legitimate) delivery thanks
to a catch from Arnie at slip. In the following over came the second wicket, a bit less conventional this
time with the batsmen chasing a wide one and chipping it up to Gijs at cover. A nice start at 25-2 from 5.
Despite thereafter a theatrical diving attempt from Gijs off the bowling of Nick, he couldn’t quite pull off
a stunning grab to really seize the initiative. The 8 th over saw Yves join the attack and send down the first
6 ball over of the innings. Conversely at the other end, Chris struggled for consistency and missed out
following a dropped catch from Frits before being eventually replaced by Floris in the 11 th over. The first
and second change bowlers plugged away for the 3 rd wicket, which eventually fell in the 14 th over with
Floris taking the catch from the bowling of his partner Yves. Great bowlers hunt in pairs.

Bowling changes can be a risky call shortly after the taking of a wicket but bringing Gijs on to start the
17 th over proved to be an inspired decision as he took the 4 th wicket of the innings with his first ball! He
then struck again in the 19 th and 21 st overs, really ripping the heart out of their batting line up. At 100-6,
their score was not too dissimilar from our own at 99-5 however. Unrelenting therefore, Sander chose
for Stefan to replace the tight bowling of Yves (7-1-19-1). It took Stefan until his 3 rd over to find his own
killer instinct, taking 3 wickets in 4 balls, the first of which a calm catch from Nick at mid-on followed by
back-to-back LBWs, thus ending the 26 th over on a hattrick ball! Frits took over from Gijs (5-0-29-3) at the
other end but Stefan couldn’t get the ball out of his hand quickly enough upon the completion of his
over. Back to the hattrick ball.

Men around the bat, plenty of chirp. The budgies from a local neighbour as animated as the rest of us.
This is Zami cricket however, and Stefan duly obliged by sliding it past leg stump for a wide. Following
that anticlimax, Frits had had enough and handed over to Martin to try and pick up the final wicket. This
should have been the case as well, when the ball was sliced to Chris at point. Despite not having to
move, Chris failed to cling on and the bar had to remain closed a little longer. Rubbing salt into the
wounds, the very next ball was hit for four. Stefan and Martin continued to tussle for the final wicket
which Martin eventually did claim by taking the edge whilst Sander made no mistake behind the stumps.
VVV were all out for 160 in 32.6 with Stefan ending on 6-2-17-3, VCC added to their string of victories
with a fine 62 run triumph. At last the all important 3 rd innings could commence. 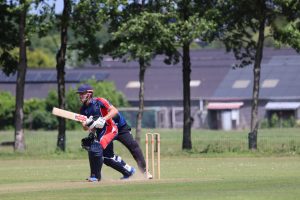 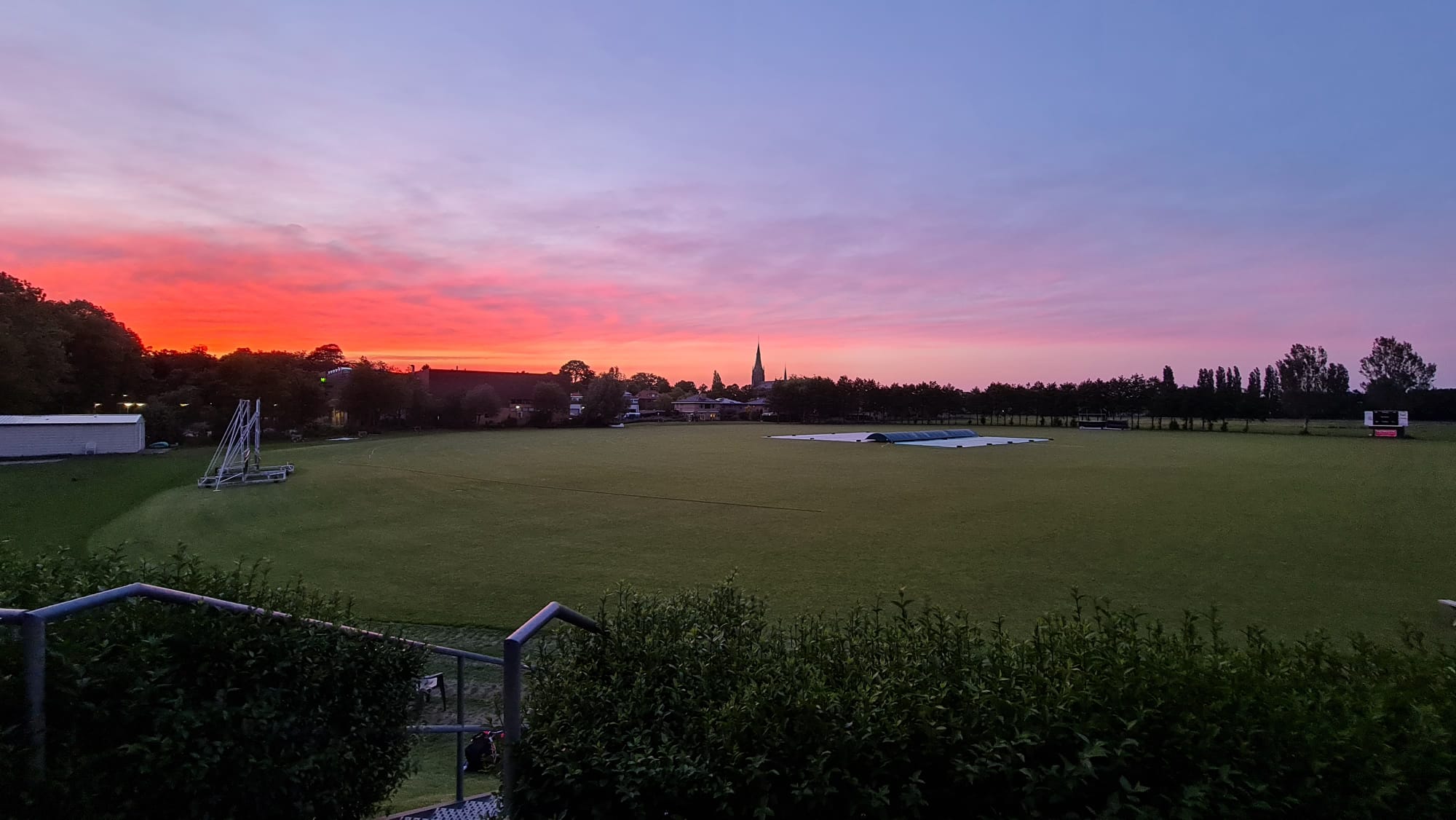 A miracle day for for a miracle win!