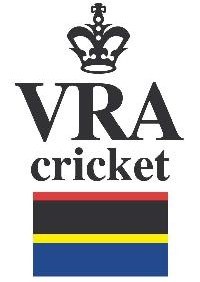 The 4th game of the season for VCC U15-1 was against VRA. The game was played on the beautiful 3rd ground at VRA. (noot red: dit was een wedstrijd tussen de twee teams die in poule A en B een bye hadden).

When the players arrived, all were ready for and excited about the match. VCC lost the toss and was asked to bat first. Shirsak Banerjee and Tom De Leede opened the batting. At the end of the 4th over, Tom was given out LBW after receiving an excellent googly from Amaan Raja. Francois Nel was promoted in the order for this match and came in next. Francois played some attacking shots, but was unfortunately run out for 27 runs from 27 balls. Miraj Mahmood batted at 4 and made 12 runs. Shirsak meanwhile batted very stylishly throughout his innings. He retired, came back at the end of the innings and eventually ended on 39 runs from 46 balls. Aldino Sixthoose and then Farhaan Khawaja had relatively brief visits to the middle, and they were followed by Cedric de Lange, who batted lower down the order than usually. Alejo Nota and Danial Razzaqi also got a batting chance, but Cedric had the most runs to show in the latter half of the innings, making 20 attacking runs of 21 balls. VCC ended their innings on 184 after 30 overs.

Ibrahim Shah and Josh Topping opened the batting for VRA. After 2 overs, Josh was run out. The next batter was Vedant Wani, but after 4 overs, he also got run out after his batting partner attempted a risky single. Aaditt Jain came in next, but also he was run out after a brilliant direct hit at the non-strikers end by fielder, Tom. This left VRA stumbling at 21 for 3 after the unusual situation of the first 3 wickets all being run outs. Suvan Patwarhan batted well for 23 runs, but was eventually bowled in the 15th over by Tom. After the drinks brake, Ibrahim got bowled by Shirsak, making a patient opener’s 24 runs of 40 balls. The innings had some further run outs and a well-deserved wicket by Farhaan. VRA were eventually all out for 100 runs in the 22nd over.

VCC therefore won a very enjoyable match by 84 runs. Run outs had a major impact on the result, which again goes to show how important good calling is for batsmen and sharp fielding is for the bowling side. Looking forward to the next challenge as we journey together as a VCC U15 team.