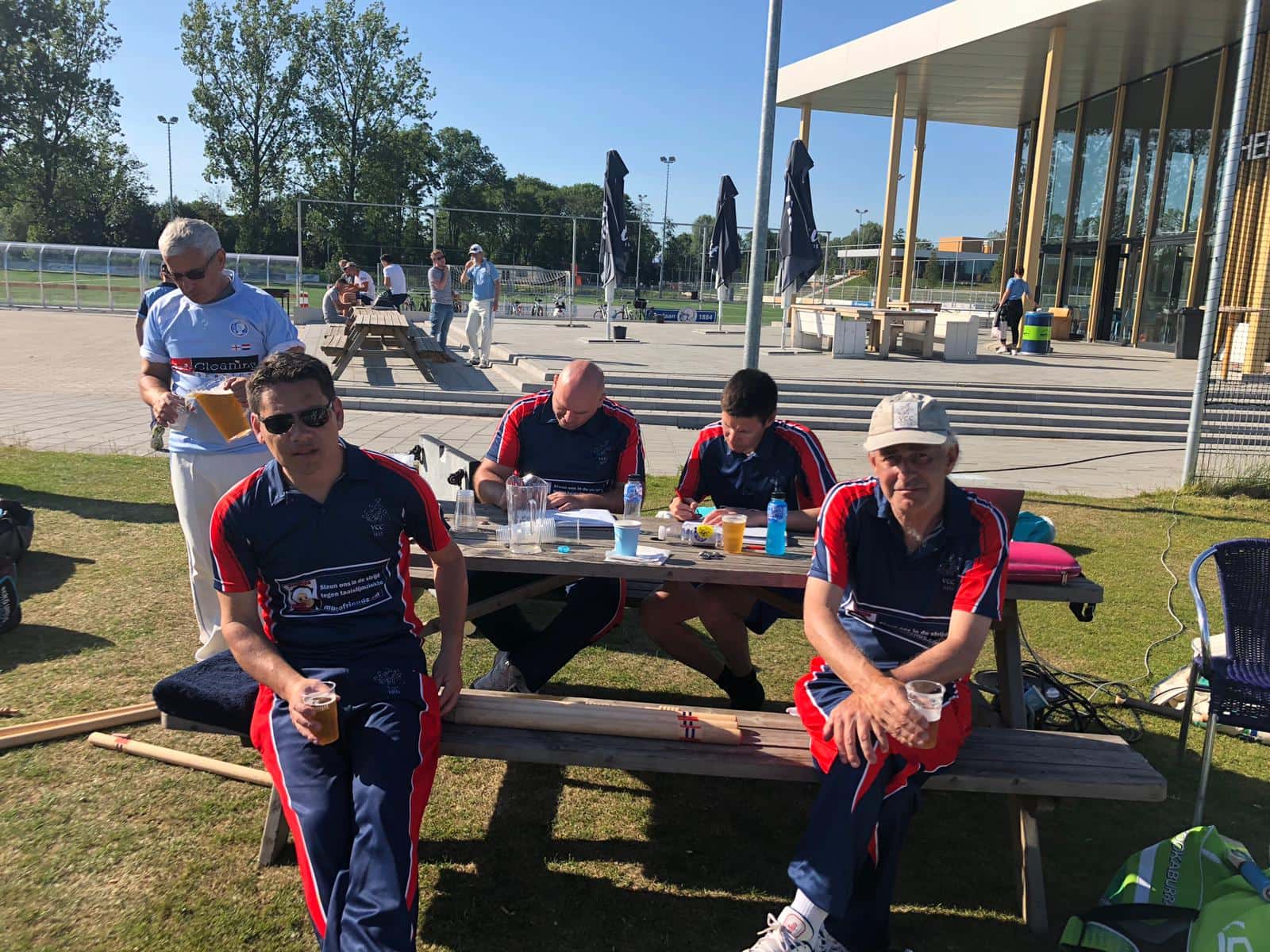 It was a hot day in Schiedam and we were asked to bowl. The Zomis would like to thank Sander and Nick from the Zamis who came to supplement our team. Birthday Boy Robbie and broken toe Richard, among others were unable to make it this week but Dinesh, despite a dodgy hip came never the less to make up the numbers.

Charu and Lailesh opened our attack but their batsmen were strong in defence and lashed onto anything loose. They were scoring at a comfortable 5 runs an over. Lailesh was replaced by Brains whilst Charu continued bowling his seven overs straight. He bowled their opener in the 13th over with an inswinging beauty with the score on 52. Charu finished with 7 overs for 27 runs and one wicket.

Vishal was brought in and immediately had an impact. Their number 3 looked stylish and confident but a super delivery caught an edge and safe-hands Sander grabbed the ball. The score was 64 for 2 after 14.4 overs.  Vishal continued to bowl with great control and nearly had the other opener out when he was on 44. A mistimed hook went in the air and the swirling ball was dropped. Vishal finished his spell with respectable figures of 7-1-30.

Batsmen 1 and 4 continued to bat strongly picking up boundaries regularly and managed to get a century plus partnership. The two pushed the run rate over 6 an over. Both the batsmen reached their half centuries and were looking quietly confident. Guus rotated the bowlers using Colin, Nick and Lailesh as best he could until finally Lailesh got the break through and bowled their No. 4 batsman (59) with the score on 171. Lailesh quickly added another scalp to his tally by bowling batsman No. 5 who scored just 2 runs. He finished his spell with figures of 7-42-2.

The other opener continued hitting out and amassed 93 runs needing 7 runs in the final over for his century. Brains outsmarted him and bowled him comprehensively (7-41-1). A few more singles were added and we finished on 202 runs. We conceded 31 extras.

After a delicious lunch the Brothers Beekhof walked in to the battlefield. Rutger (5) was bowled in the fifth over with the score at 22. Guus and Lailesh developed a good partnership scoring at just over 5 runs an over. Both played excellent shots particularly against one of the fastest bowlers in our league.

Our batsmen continued to bat sensibly despite some very good bowling and fielding by the opposition. Unfortunately, the required run rate was rising and Guus decided to hit out. However, he miscued and sent a gentle lob to point. He scored 51 runs with the score of 105 after 23 overs. ‘Safe hands’ Sander switched roles and became ‘swashbuckling’ Sander. He and Lailesh raised the tempo before both fell quickly with the score at 146 and 149. Lailesh had scored 51 and Sander 27.

Heave-ho Charu (18 and out on the final ball of the day) and Dinesh (8*) tried hard to reach the finishing line but the task was always an uphill struggle. With their good sensible bowling and the boundary lines adequately protected we finished on a score of 176 for 5, a shortfall of 26 runs.

We ended the evening in glorious sunshine with our hosts providing beer and snacks.